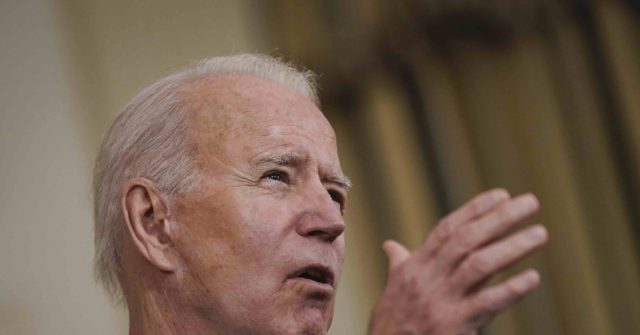 CLAIM: President Joe Biden said Friday that his administration had “turned around a slow-moving vaccination program.”

VERDICT: MOSTLY FALSE. The program was already on a rapid pace — despite skepticism from Biden and Democrats.

Biden continues to lie about President Donald Trump’s coronavirus vaccine program, claiming Friday during a statement on the recent jobs report that he had “turned around a slow-moving vaccination program.”

Not only did Trump’s Operation Warp Speed produce vaccines in record time, but nearly one million Americans were being vaccinated daily when he left office.

The Biden administration has sought to claim credit for the vaccine program in two misleading ways: first, by denying credit to Trump; second, by downplaying the fact that Biden, Vice President Kamala Harris, and others were skeptical of the plan.

As Former Senior Advisor to the Department of Health and Human Services John “Wolf” Wagner confirmed to Breitbart News on Friday there was a vaccine distribution plan far before Biden took office.

In fact, a key component of Operation Warp Speed had been to prepare for distribution long before anyone knew which particular vaccine (if any) would be proven effective.

The Department of Health and Human Services outlined the distribution plan in September 2020. When there were initial problems, thanks in part to confusion over a two-dose system, and in part due to differing state policies, the outgoing administration updated its plan to expand vaccination sites and the number of Americans who were eligible to receive it.

During the 2020 presidential campaign, Biden claimed on the debate stage that “there’s no prospect that there’s going to be a vaccine available for the majority of the American people before the middle of next year.” Then-Sen. Kamala Harris (D-CA) declared during the vice presidential debate that she would listen to public health officials, but “if Donald Trump tells us that we should take it, I’m not taking it.” Some Democratic governors also insisted on testing any vaccine before distributing it.

While the Biden administration has indeed been able to accelerate the delivery of vaccines, it owes the very existence of the vaccine to the Trump administration’s efforts, and inherited a distribution program already well on the way to success.