In February, top officials at the Immigration and Customs Enforcement (ICE) agency announced sanctuary country orders that prevent agents from arresting and deporting about 9-in-10 illegal aliens who would otherwise be deported.

The orders require that ICE agents only prioritize arrest and deportation for illegal aliens who have been recently convicted of aggravated felonies, are terrorists, or known gang members.

Angel Mom Kiyan Michael, whose 21-year-old son Brandon was killed in 2007 by a twice-deported illegal alien, said illegal immigration “is not a joke” and noted the real-life impact that American families face when their loved ones are the victims of illegal alien crime.

“They talk about the separation of children … but real separation is having to go to the cemetery and look at your child,” Michael said. “That’s the only way you can visit them. He’ll never come home. Our children are not coming back.”

Our son, Brandon Randolph Michael, 21-years-old and we live in Jacksonville, Florida. So he’s on his lunch break going to cash his paycheck — just like every other kid, young man — engaged to be married, he had his whole life ahead of him when a twice-deported illegal crashed into our son. Just weeks prior, he had been stopped by our local law enforcement, they found him to be driving without a driver’s license and they just let him go. They released back into our community. [Emphasis added]

What this administration doesn’t realize is that this is not a joke. These are human beings. Without borders, we are not a nation. Nations define who we are. It defines our destiny. It protects our people. When we go to bed at night, we lock our doors to protect the people that we love on the inside. [Emphasis added]

This is not about racism as they project it to be. I mean obviously, we’re talking about people that come from 53 different nations that look like everyone in this room. This is about Americans being safe. We’re grateful to you governor for protecting American citizens. You’re standing up, you’re fighting for our families. [Emphasis added]

Angel Dad Jamiel Shaw Sr., whose 17-year-old son Jamiel Shaw Jr. was murdered in cold blood in 2008 by an illegal alien gang member recently out of jail, told the story of his son’s case — in which he describes an aspiring young athlete whose life was taken as a result of local authorities flouting federal immigration law.

[The illegal alien] was only given eight months in the county jail and he was released in four months. The same day he got out, he was in my neighborhood and caught my son and shot him in the head. He shot him in his stomach and while he was on the ground with his hands up in the air … he shot him in his head. And he, of course, murdered him. [Emphasis added]

My son was playing football, he was getting recruited by Rutgers, West Virginia, Texas … he was three-time MVP, player of the year, he was running track … he knew where he was going, he was 17-years-old. [Emphasis added]

While all of this was going on, his mother was on a second tour of duty in Iraq. Can you imagine? [Emphasis added] 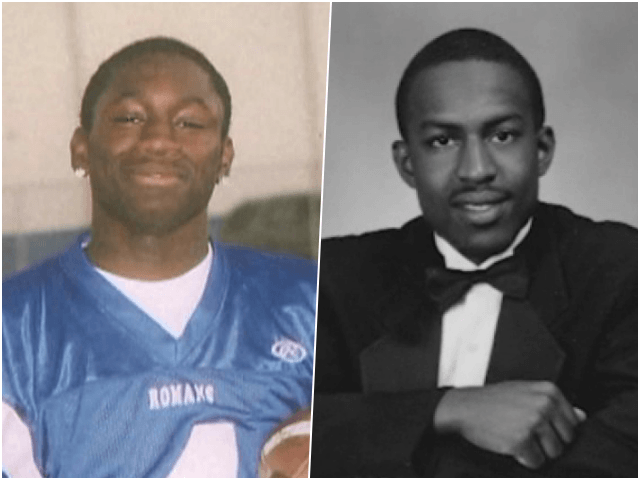 Michael said she fears her son’s killer has returned to the U.S. illegally as a result of lax enforcement of federal immigration law.

“I don’t think there’s a day that goes by that I don’t think that had they just detained him and just kept him and removed him from our community, our son, our middle child would still be here today,” Michael said of the illegal alien who killed Brandon. “This is something you’ll never get over.”

To combat Biden’s orders, DeSantis has directed an illegal immigration crackdown in Florida where state agencies must report to local law enforcement whenever a criminal illegal alien is released in their community.

Likewise, DeSantis’ directives mandate state agencies to identify criminal illegal aliens in prison and “pursue all legal means available to transfer them to ICE custody upon completion of their Florida prison terms.”

Already, Florida Attorney General Ashley Moody — in a lawsuit against the Biden administration — revealed that convicted illegal alien felons are being released from state prison following their sentences thanks to Biden’s orders, a sanctuary policy that Angel Families have long said will inflict more harm on American victims.

“They talk about DREAMers. [My son] had dreams. Jamal had dreams,” Michael said.