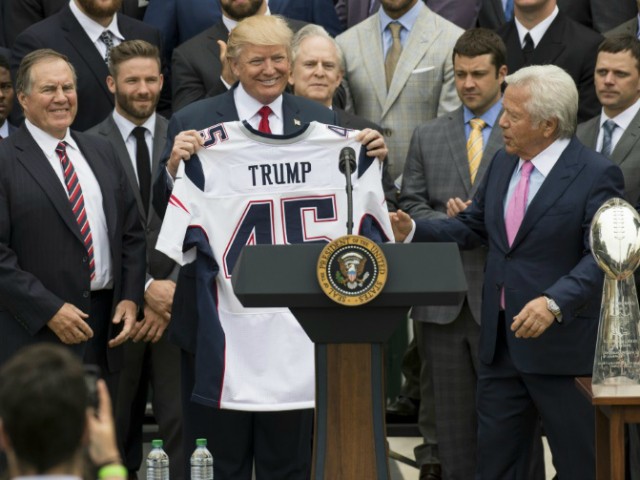 President Donald Trump praised the continued success of the New England Patriots ahead of another appearance in the Super Bowl on Sunday.

Trump praised the Patriots owner Robert Kraft, coach Bill Belichick, and quarterback Tom Brady for their continued success. The Patriots appeared in the Super Bowl in nine of their last 18 seasons.

“It’s talent, it’s chemistry — they have a great chemistry with each other — I mean, I like all three of them,” Trump said in an interview with the Daily Caller. “As you know, I’m a very good friend with them.”

Trump singled out Brady for his performance in the playoff games leading to the championship.

“How good was Brady, I mean, the last game? Not the last game, the last two games,” Trump said. “Brady plays better under pressure than he does in a regular game. I mean, that last two minutes, the way he was throwing the ball down the field — they were bullets.”

“I’ve seen how hard that ball comes at you, those guys were doing a great job. They were catching that, you know?” he said. “That ball is whipped.”

The president even praised NFL Commissioner Roger Goodell describing the recent NFL games as “really good” except for a blown call in the playoff game between the New Orleans Saints and the Los Angeles Rams.

“I feel badly, it was a great state that voted for me, Louisiana,” he said. “I feel very badly for Louisiana because that was maybe the worst call I’ve ever seen, but I guess there’s nothing they can do about that.”

The Patriots will face the Los Angeles Rams in Sunday’s game.