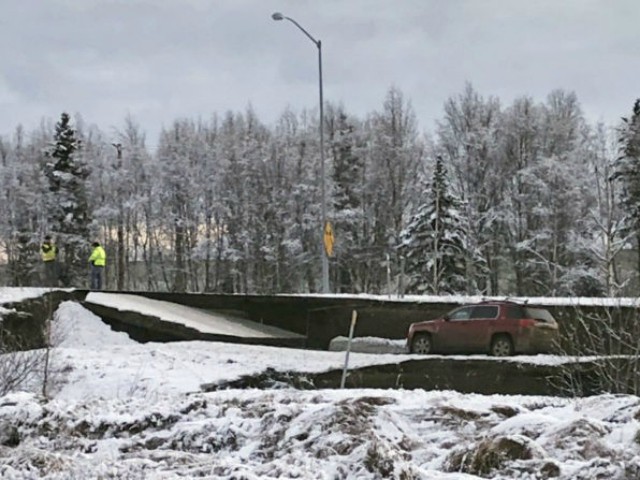 President Donald Trump has been briefed on Friday’s massive 7.0 earthquake in Alaska.

Trump has been holding meetings with world leaders at the Argentina G20 summit.

“The President has been briefed on the earthquake near Anchorage, Alaska, and is monitoring damage reports,” wrote Sanders. “We are praying for the safety of all Alaskans!”

The President has been briefed on the earthquake near Anchorage, Alaska, and is monitoring damage reports. We are praying for the safety of all Alaskans!

The quake measured a 7.0 magnitude after being updated from an early 6.6 magnitude measure. The 19-mile-deep quake hit just north of Anchorage in Point MacKenzie.

Photos and video of destroyed roads and massive internal building damage began streaming onto the Internet shortly after the quake, showing trashed rooms.

Here is a picture a high school friend who lives in Anchorage just sent. pic.twitter.com/Q5YmMDkKZ1

Former Alaska Gov. Sarah Palin tweeted that her family survived the quake, but the Palin family home in Wasilla did not:

🙏🏼 for Alaska. Our family is intact – house is not… I imagine that’s the case for many, many others. So thankful to be safe; praying for our state following the earthquake.

One video shows a courtroom as the quake begins, along with the jarring, prolonged shaking that sent people ducking under desks.

This is what happened on the 6th floor of the Nesbett Courthouse during the Anchorage #earthquake. Both attorneys jumped under their desks. Evacuated the building after the shaking stopped. pic.twitter.com/dqHGPCv6XO

The National Tsunami Warning Center issued a tsunami warning that was later lifted in southern coastal regions of Alaska.