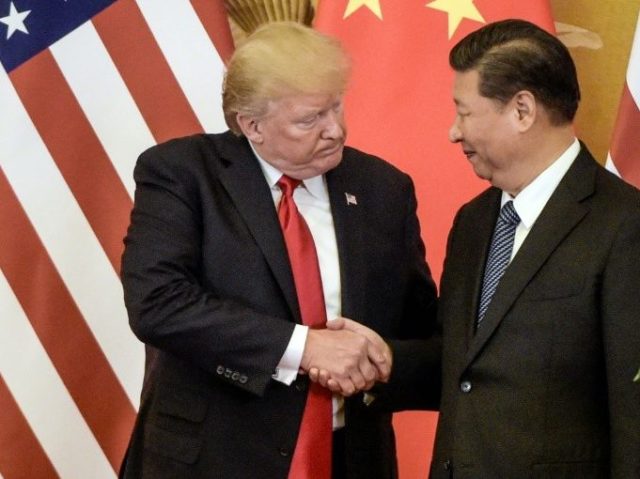 Donald Trump and Xi Jinping are due to dine together Saturday night. They are the leaders of the two largest economies on the planet, but that is where the similarities end.

Trump’s America is awash with wealth and promise, while Xi Jinping’s China is suffering from a series of major setbacks.

Xi’s immediate problem is Trump’s tariffs, which have hit China hard. Research by EconPol Europe shows that the Chinese economy is bearing the brunt of the tariffs, with less than one-fifth of the cost being passed along to Americans. To make matters worse, Trump has promised to hike tariffs to 25 percent across the board.

The EconPol Europe report also suggested that the tariffs imposed to date will reduce the U.S.-China trade deficit by 17 percent, or a cool 64 billion dollars. This will happen because companies are fleeing China to the tariff-free climes of India, Vietnam, Thailand, and even the United States (!). It is no surprise that the country just reported its weakest manufacturing growth in years.

But this is only the beginning of the bad news for the Chinese president. Xi oversees an anemic economy where the stock market is tanking, consumer confidence is sagging, and bankruptcies are rising. The slowing economy has already caused the entire “people-to-people” (P2P) lending sector — a semiofficial Ponzi-scheme endorsed by the government – to go belly up.

In addition, China has huge, off-the-books debt issued by provincial, prefectural, and county officials, often for residential or commercial construction projects that will never pay for themselves. Desperate for capital, Chinese companies have in recent years racked up 3.4 trillion in dollar-denominated debt. It is hard to see how this money will be paid back as China’s economy slows and the Yuan continues its slide. (This probably accounts for a lot of the anguish on Wall Street over Trump’s tariffs, by the way).

Xi will sit down to dinner knowing that his country is slipping into recession. He also knows that, if he does not convince his American counterpart not to further raise tariffs, a recession is inevitable.

As Donald Trump has said on numerous occasions, “It’s not difficult to win a trade war.”

China’s problems are exacerbated by a host of self-inflicted wounds, mostly stemming from Xi Jinping’s own imperial ambitions. He drew up the “China 2025” plan to dominate hi-tech by 2025 and the world by mid-century. He launched the New Silk Road to re-center the world’s economy around China. And he embarked on a major military build-up to dominate not just the South China Sea, but the Indo-Pacific and beyond.

None of these things came cheap. He has spent half-a-trillion dollars on his New Silk road initiative, with the promise of eight trillion more. Add to this a trillion-dollar military build-up and hundreds of billions of dollars more subsidizing China’s hi-tech industries, and we are talking about real money.

Perhaps it was natural that Xi would overreach since he came to power under the weakest American president in a century or more. Obama seemed more interested in managing American’s decline rather than confronting China on trade and other issues.

How badly has Xi overplayed his hand?

The “China 2025” plan is now in ruins as the rapacious and ongoing Chinese theft of IP is out in the open for all to see. Virtually every developed country has suffered from China’s depredations. And they are beginning to fight back not only individually, but in concert.

The New Silk Road is far from complete, and already nations are seeing the Chinese destroying the sovereignty of nations like Sri Lanka and the Maldives that signed up for it. Beijing may call it “One Belt, One Road,” but it is more like “One Belt, One Debt Trap.”

Who wants to enter into a “predatory lending” agreement with a country that strips its trading partners of their sovereignty, steals their IP, throws up non-tariff barriers to their exports, steals jobs, and manipulates their exchange rates? At the end of the day, who wants to be Venezuela, Cuba, or North Korea?

And then there are the particular Belt and Road deals that China is trying to cut with the various “-stans.” How likely are they to surrender their sovereignty now that Beijing is shipping off its Uyghur minority — fellow Central Asians – to concentration camps? Surely the sight of a million of their fellow Muslims languishing in makeshift prisons must give them pause.

Xi Jinping should have finished stealing the technology he needed for “China 2025” before bragging about how China was going to own the hi-tech industries of the future.

He should have completed the Belt and Road on reasonable terms before trying to turn the recipients into vassal states.

Most importantly, he should have kept his “China Dream” of world domination that I write about in Bully of Asia to himself.

Will Xi offer enough concessions on trade at dinner tomorrow night to forestall the next round of Trump tariffs? Perhaps.

But for Trump, who prides himself on putting America First, this is not just about trade.

It is about confronting what his vice president, Mike Pence, recently called China’s “empire and aggression.”

And that means that the tariffs may stay in place for a long time.

Steven W. Mosher is the President of the Population Research Institute and the author of Bully of Asia: Why China’s Dream is the New Threat to World Order.