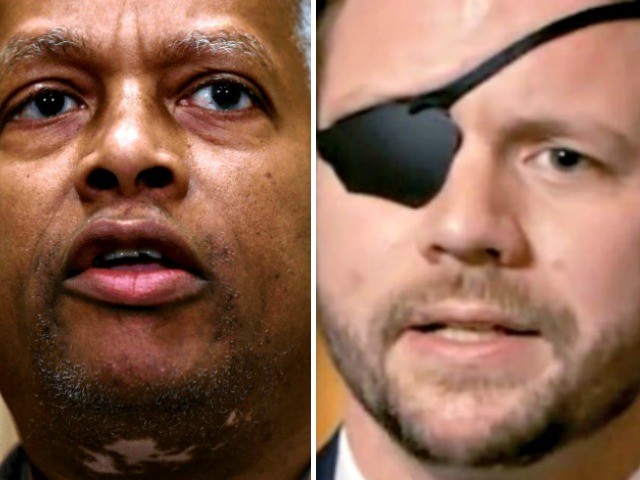 Rep. Dan Crenshaw (R-TX), a freshman congressman and former Navy SEAL, slammed Rep. Hank Johnson (D-GA) for comparing President Trump to “Hitler” and insulting the tens of millions of Americans who voted for him.

Johnson, in recent remarks to the Atlanta chapter of the National Association for the Advancement of Colored People (NAACP), said:

Donald Trump’s supporters are older, less educated, less prosperous, and they are dying early. Their lifespans are decreasing, and many are dying from alcoholism, drug overdoses, liver disease, or simply a broken heart caused by economic despair,”

Crenshaw, in a video posted on Twitter Sunday, said to Johnson, “OK Mr. Johnson, President Trump is a lot of things, but he’s not Hitler.”
“He didn’t kill millions of people. He didn’t start a world war, he doesn’t have any concentration camps, and to accuse him of being Hitler is intellectually dishonest, and frankly a huge insult to the millions of Jews who died under Nazi Germany,” he said.

But Crenshaw saved most of his vitriol for Johnson’s attack on Trump supporters, calling it “cowardly.”

“You went on to insult, degrade, and demean tens of millions of Americans who voted for him, to call them drug-addicted, uneducated, unhappy alcoholics — this is a cowardly form of politics,” he said.

“No matter how much I will disagree with you in Congress, I will never, ever insult the good Americans who voted for you,” he added.

“I will never paint an entire half of the country as ‘deplorables’ or fools or the dregs of society, I’ll never do it. And if I do, and if I ever do you better call me out on it, because I can’t imagine a worse form of leadership.”

Crenshaw pointed out that unlike Johnson, Trump supporters do not have huge public platforms to get their opinions out.

“And you use your public platform to insult and demean them,” he said. “This is not the behavior we expect from a member of Congress.”

Crenshaw invited Johnson to “pick on someone your own size,” including him. “My hall will be right down the office from yours.”

Stop insulting Americans just because they vote for someone you don’t like. pic.twitter.com/8wrP3ybtPe

The former Navy SEAL lost his right eye after being hit by an improvised explosive device (IED) in Helmand, Afghanistan, in 2012, and went on to deploy twice more, to Bahrain and South Korea.