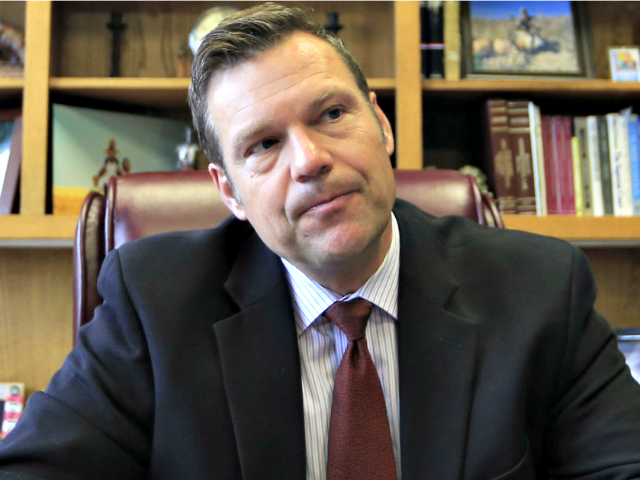 Kansas Secretary of State Kris Kobach says only a wall can stop illegal immigration, while promises of “border security” with “drones and sensors” merely facilitate crossings at the United States-Mexico border.

In an exclusive interview with SiriusXM Patriot’s Breitbart News Sunday, Kobach says it is a border wall, coupled with U.S. Border Patrol, that can stop soaring illegal immigration at the southern border, not the Democrats’ and Republican establishment’s preferred promise of “border security” measures.

The argument we sometimes hear from people who say they want border security but really aren’t serious about it is ‘Oh, we’ll just have drones and sensors.’ Well, a drone and a sensor tells you that somebody is entering the United States, it doesn’t stop the person from entering the United States. The wall is exactly, the single most effective tool, other than Border Patrol agents, and that’s what we need. The American people recognize it. [Emphasis added]

Kobach said a wall along the southern border is immensely popular with Americans, pointing to the GoFundMe campaign that has raised close to $20 million to fund a border wall.

“We the American people are so desperate for a wall, so desperate for control of our southern border that literally [hundreds of] thousands of people have donated millions of dollars … in a 19 day period, the GoFundMe campaign raised $19 million, which is just staggering,” Kobach said. “There’s never been a campaign on GoFundMe that’s raised money that quickly.”

“It’s amazing that the most basic, straightforward appropriate the money, build the wall option is encountering so much resistance among the open border crowd in Congress,” Kobach said.

The loyal Trump supporter revealed he is also considering a run for the U.S. Senate to replace Sen. Pat Roberts (R-KS), who announced his retirement.

“Securing our nation’s border and stopping this illegal immigration problem that’s been plaguing this country for so many decades is one of my top priorities,” Kobach said. “It’s been the central focus of my career, so one way or the other, I’m going to keep pushing towards that objective.”

“In the months ahead, if running for the Senate is the best way to achieve that objective, then I’d certainly consider it even more seriously,” Kobach said.

The federal government has been partially shut down for more than 15 days now as Republicans, Democrats, and the Trump administration have yet to reach a deal to fund a wall along the U.S.-Mexico border to stop illegal immigration.