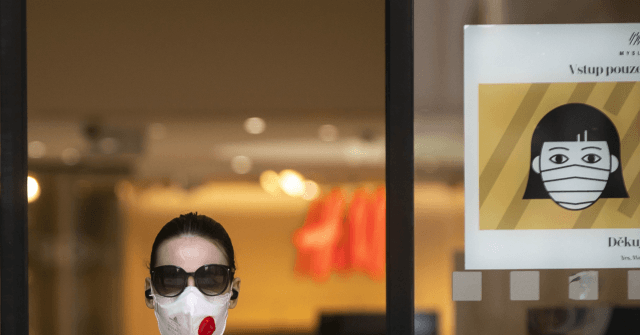 The Czech Republic is set to undergo a lockdown as most shops and many businesses will be forced to close as the country sees record daily new Wuhan coronavirus infections.

From Thursday onward, all shops will be forced to close their doors with exceptions made for supermarkets, pharmacies and select shops. As of Wednesday, the country is also making it mandatory for residents to wear masks in public outdoors as well as indoors spaces.

Masks must be worn even while driving if the car contains people who are not from the immediate family of the person driving the vehicle, Austrian tabloid Kronen Zeitung reports.

The new restrictions come as the Czech Republic has seen a surge of new cases of the Wuhan coronavirus in recent weeks and set a new daily infection rate record on Tuesday with 11,984 new cases of the virus confirmed by Czech health authorities.

According to statistics from the Czech government, the country saw just 273 cases as of August 31st, which has substantially increased since the beginning of the month of October.

The number of deaths during the same period has also increased from just one death on August 31st to over a hundred on October 20th. Just over 4,000 people are currently hospitalised due to the virus. The Czech Republic has one of the highest per capita infection rates in Europe.

Other European countries are also seeing a surge in new coronavirus cases as well and some, such as France, have introduced curfew measures to stop the spread of the disease but have not gone into full lockdown yet.

The Italian region of Lombardy, which was hit hard by the virus earlier this year, has also introduced curfew measures for the next three weeks.

Other Italian regions, such as Campania, have also announced they will be enacting similar curfew measures.

Meanwhile, the Mayor of Naples Luigi de Magistris claimed that the city only had 15 intensive care beds free and said a return to the stricter lockdown measures introduced earlier in the year was a major risk.