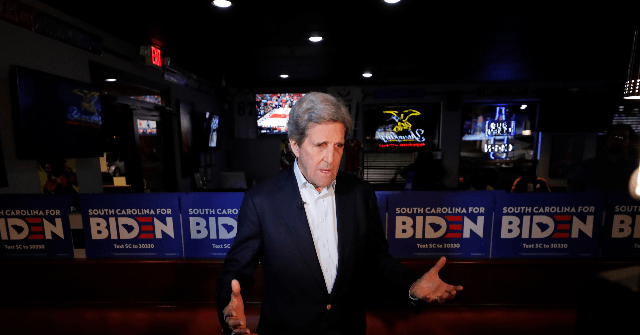 With recent successful Middle East peace deals brokered by the Trump administration exposing years of failed Democrat policies, former Secretary of State John Kerry sought to claim his part in making the epic deals a reality, despite having railed against the possibility of such events when serving in the Obama administration.

Kerry praised the Trump-brokered deals between Israel and the United Arab Emirates (UAE) and Bahrain in an interview with Rolling Stone last week, but insisted, “This has been in the making for a number of years now. I talked many times about reducing the sort of crazy hangover of lack of socialization between these countries.”

After claiming he had long recommended the steps that were taken to achieve peace, Kerry praised the Trump administration’s historical accomplishment.

Yet, despite his praise, Kerry also sought to minimize its implications.

“It’s not peace in the Middle East. Nobody should pretend that,” Kerry added. “It has nothing to do with the Palestinians.”

Kerry was largely humiliated last month after a clip went viral of the former secretary of state balking at the possibility of Israel-Arab peace without first solving the Palestinian conflict.

As Breitbart News reported, the recently resurfaced video depicted a confident Kerry lecturing on the impossibilities of achieving that which the Trump administration did in September in one more blow to Kerry and the Democratic establishment’s long-held foreign policy doctrines.

Kerry’s speech at the 13th annual Saban Forum at the Willard Hotel in December 2016 at the end of the Obama administration’s term included the claim that “I’ve heard several prominent politicians in Israel sometimes saying, well, the Arab world is in a different place now, we just have to reach out to them, and we can work some things with the Arab world, and we’ll deal with the Palestinians. No, no, no, and no.”

“There will be no advanced and separate peace with the Arab world without the Palestinian process and Palestinian peace. Everybody needs to understand that,” Kerry continued as he indicated what U.S. policy must be. “That is a hard reality.”

Only weeks ago, Israeli Prime Minister Benjamin Netanyahu joined leaders from Bahrain and the UAE in an epic ceremony, signing peace agreements and effectively normalizing relations between the nations, as the Trump administration brokered two major Middle East agreements in a matter of weeks.

Not only were accords signed last month, but the new “warm peace” has hailed a wave of enthusiasm as well as an array of opportunities.

In a further solidification of the cordial relationship, a historic UAE delegation arrived in Israel on Tuesday as the U.S., Israel, and the UAE announced the establishment of a Jerusalem-based joint regional development fund during the first-ever visit of a government delegation from Abu Dhabi to Israel.

Also on Tuesday, during an interview in Israel, the UAE Minister of Economy Abdulla bin Touq described his country’s enthusiasm for peace with Israel and the hope for many future possibilities together.

“I think this relationship will open a lot of opportunities and many sectors in many areas,” he said.

Contrary to Kerry’s declarations, the peace agreements were achieved without the need for any Israeli concessions or on the conditioning of Palestinian statehood.

Neither President Trump nor Prime Minister Netanyahu even mentioned the Palestinians during the accords ceremony, which President Trump hailed as the “dawn of a new Middle East.”

While Kerry has been campaigning with Biden after having thrown his support behind the Democratic nominee, Biden confidants have long been privately discussing potential leaders and cabinet members for his White House.

Kerry, along with many familiar faces from the previous Obama administration, is likely a high-profile choice, possibly even accepting a return as secretary of state.

Biden advisers describe a Return to Normal plan, a reversal of President Trump’s unorthodox style, as he seeks known and trusted people around him — many from the Obama years.

With Obama-era policies and predictions crumbling as the Trump administration continues to develop new avenues to advance peace, some have expressed fears that a Biden administration would return the U.S. to those same age-old failed policies.

“The only thing more amazing than this clip of John Kerry is that the Democrats are currently running on putting all the same people from this clueless administration back into the WH,” Washington Free Beacon executive editor Brent Scher concluded.