Republicans have outpaced Democrats in the first two days of early voting in Florida, according to data from the state’s Division of Elections.

Early voting kicked off in the majority of Florida’s 67 counties on Monday, breaking a record with more than 350,000 votes cast on the first day alone. According to data last updated early Wednesday morning, Republicans outpaced Democrats in early voting by just over 41,000, or 321,007 ballots cast to the Democrats’ 279,968.

Overall, 720,968 Florida voters –including Republicans, Democrats, and those unaffiliated with either major party — cast their ballots on the first two days of early voting.

However, Democrats still hold a significant advantage in total ballots cast due to an increase in vote-by-mail. According to the data, 1,428,664 Democrats have already cast their ballot by mail compared to 900,828 Republicans who have done the same. 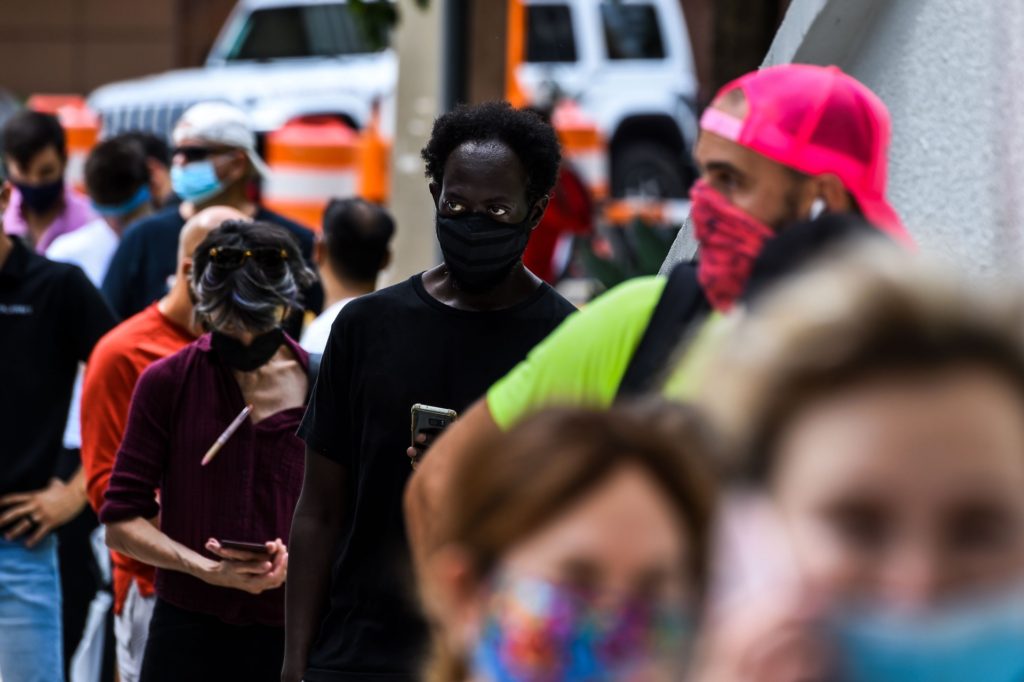 Voters wait in line to cast their early ballots at Miami Beach City Hall in Miami Beach, Florida on October 20, 2020.  With two weeks to go until Election Day, President Donald Trump and Joe Biden adopted radically different strategies to secure votes — the Republican incumbent ramped up his appearances and the Democratic challenger opted to hunker down at home. (CHANDAN KHANNA/AFP via Getty)

The data also showed that a vote by mail ballots have been issued to 1,203,033 Democrats which have not yet been returned, as is the case with an additional 926,699 mail-in ballots issued to Republicans.

When ballots cast by mail and in the first two days of early voting are combined, Democrats hold a 486,797 voter advantage over Republicans in the Sunshine State. Overall, over 3.6 million voters have already cast their ballots in the battleground state.

The GOP, on the surface, does not seem to be alarmed by their voter deficit, expressing the belief that Democrats are simply changing the way they vote by doing so by mail rather than voting early or in person. In other words, they do not necessarily believe their opposition is gaining new voters, pointing to GOP’s continual growth in voter registration in the state.

Why is that huge?

This is not good news for @JoeBiden.

A University of North Florida survey released Tuesday showed a narrow race in the Sunshine State, with Biden leading Trump by a single percentage point — a lead well within the survey’s margin of error.