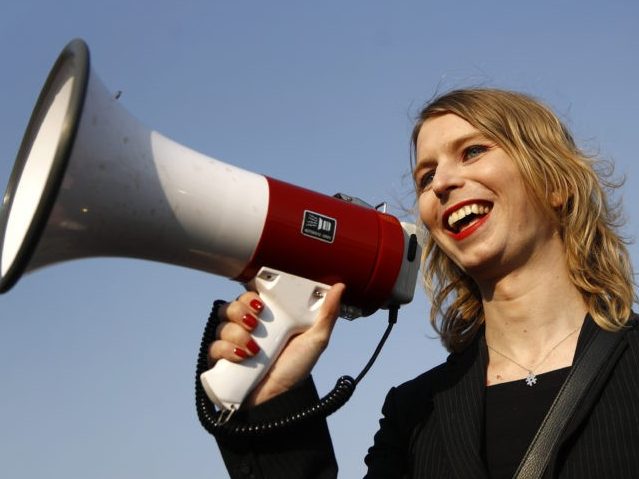 Convicted intelligence leaker Chelsea Manning told an audience in the United Kingdom on Monday that life in the United States is just like serving time in a military prison.

Manning spoke before an audience gathered at the Royal Institution in London, criticizing the Trump administration and the “surveillance systems, cameras, and police presence” that have made the U.S. less free, the Guardian reported.

“This whole notion that you get out of prison and you are free now turned out to be a bit of a downer in that sense,” Manning said Monday. “Because what happened, we really built this large, big prison, which is the United States, in the meantime–it was already happening, it just really intensified.”

“You think about the fact that we have walls around our country, and that is very much the same thing that is inside a prison,” the convicted intelligence leaker added. “I see a lot of similarities between the world out here and the world that was in there.”

The 30-year-old, who is fresh off a failed U.S. Senate bid, made the appearance in London a month after Australia barred the transgender activist from entering the country for a speaking engagement. New Zealand later allowed Manning into the country to hold a speaking event.

Manning had been convicted in 2013 of leaking classified documents to WikiLeaks but former President Barack Obama decided to commute the transgender activist’s sentence shortly before he left office.

When Manning was released from prison after serving seven years, the former convict turned to transgender rights activism and hit the speaking circuit before launching a U.S. Senate bid in Maryland against Sen. Ben Cardin (D-MD). In September, Breitbart News reported that Harvard University brought on Manning as a visiting fellow at their Institute of Politics.