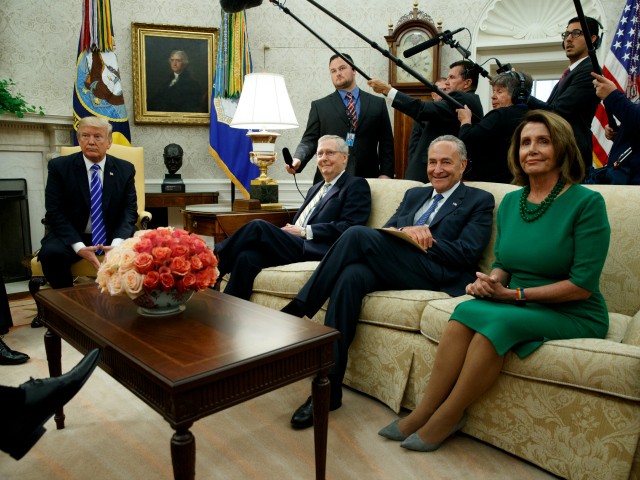 On Wednesday, President Donald Trump stood in the Roosevelt Room and launched the First Step Act, a prison reform bill that the administration has been working on, quietly, for two years.

Though it still has its critics, the bill has, remarkably, won the support of the Fraternal Order of Police as well as prominent African-American leaders.

The president used the event to highlight the importance of bipartisanship — an explicit signal to the incoming Congress.

The week before, Trump warned the Democrats that if they tried to use their new power in the House to bring down his presidency, he would go to “war” against them. But he also said that he believed that a divided government had tremendous dealmaking potential.

In that light, the First Step Act could be the beginning of a joint effort to address challenges that have ready solutions but that, because of their political difficulty, need bipartisan support to pass.

1. Infrastructure – Trump has proposed upgrading roads, bridges, and airports for three years. Democrats also favor investing in infrastructure — though under Obama, that meant massive spending on dead-end boondoggles like Solyndra and high-speed rail. Trump’s idea is to harness private sector capital. With Democratic support, there may be a way to leverage small amounts of federal spending to encourage large amounts of private funding.

2. Prescription drug prices – Trump is the first Republican leader to take up the Democratic idea of using the purchasing power of the government to negotiate lower prices for prescription drugs from large pharmaceutical companies. Doing so would help reduce costs to Medicare and Medicaid, while creating positive spin-offs for patients in general. Working together, the parties can force Big Pharma and its lobbyists to agree to terms.

3. National debt – President Barack Obama created a bipartisan commission on the national debt as part of the Budget Control Act of 2011 (itself a weak compromise that came about after Obama torpedoed a “grand bargain” during the debt ceiling talks). He then ignored its recommendations. Trump could revisit the discarded plan and negotiate compromises on spending and taxation from a position of strength, with the 2017 tax cuts in hand.

4. Social Security – Trump has promised not to touch entitlements. Yet Social Security still has massive long-term financial problems. Trump and Democratic leaders could emulate the example of President Ronald Reagan and then-Speaker of the House Tip O’Neill and agree to raise the retirement age to 70 over the next several decades. Doing so is a relatively painless fix that could likely save Social Security without affecting present beneficiaries.

5. Heath insurance – Obamacare remains a disaster, but Republicans failed to repeal and replace it. It has become clear that the public wants the guarantees of Obamacare without the high costs and restrictive regulations. Trump has spoken in the past about his preference for an Australian-style system, where basic care is guaranteed and private insurance picks up everything else. Both parties have a mandate to negotiate towards that kind of change.

These are just a few possibilities. There are risks: some compromises should be avoided, such as new, unnecessary climate change regulations. Moreover, Democrats have already rejected Trump’s immigration ideas; Republicans will reject compromises on guns. In addition, many Democrats want to push Trump out of office, not help him.

Still Trump has shown a remarkable ability to achieve tasks once thought impossible. He seems inclined to try again.