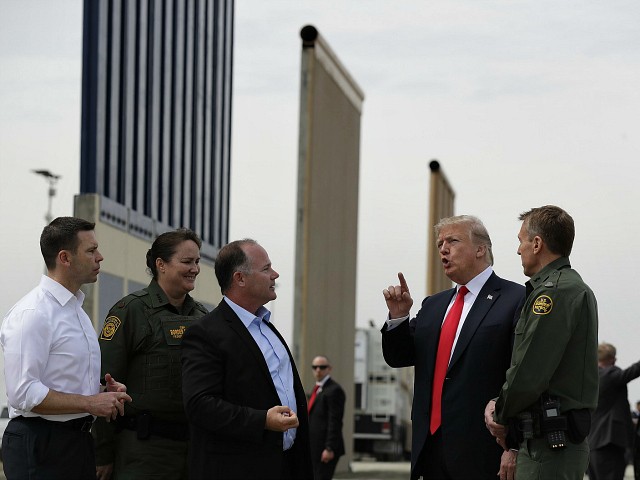 GOP senators are nudging President Donald Trump to give up hopes for a $5 billion down-payment on a border wall in 2019.

“My goal is to get the [budget] bills passed” in December, said Sen. Richard Shelby, the GOP chairman of the Senate’s appropriations committee, said Nov. 15 after meeting Trump for a budget discussion. His committee has penciled in $1.6 billion for the wall in 2019, compared to the $5 billion in the draft House bill. Shelby added, according to the Washington Post:

And whatever we can do in a reasonable fashion, to get it done …  might personally like a bigger goal. But I use the word doable. You’ve got to figure out what’s doable.

“I said we shouldn’t ever want to shut down the government,” Shelby told reporters when asked about discussion about a possible shutdown.

“I think maybe he agreed, I don’t know,” he said of Trump’s response.

House and Senate GOP leaders show no willingness to lead a public fight for wall funding as the Central American caravan’s economic migrants gather in Tijuana before crossing into California. But several Senate and House GOP leaders are pushing the president to sign a crime bill that will provide an early release to thousands of violent criminals and drug smugglers amid a national drug-disaster which has killed 100,000s of Americans.

Democrats have enough votes and discipline in the Senate to block any budget deal, but they may want to avoid a budget clash and government shutdown so that they may endorse another $1.6 billion budget in 2019. The allocation would push Trump’s border-wall spending up to a total of $4.8 billion from 2017 to 2019.

But Democrats are opposing Trump’s push for $5 billion in wall funding in 2019.

“If it’s ‘Wall or nothing!’ they’re going to get nothing,” the top Democrat on the Senate’s appropriations bill, Sen. Patrick Leahy, said November 12.

Democratic lobbyists predict their party will gain in 2020 from a 2018 impasse. The Hill reported:

“One, it will continue to help with suburban women. Number two, it will mobilize Latino voters,” said Celinda Lake, a Democratic pollster. “The third thing [is], particularly if Democrats lean into it, immigration can be a huge liability [for Republicans].”

Democratic leader Sen. Chuck Schumer is signaling he will approve a status-quo wall-building budget of $1.6 billion for 2019.

But he is also hinting that he may demand a price, such as accelerated green cards for roughly 400,000 Indian and Chinese white-collar visa-workers plus their family members. The green card plan was put in the House’s draft DHS budget for by Kansas Rep. Kevin Yoder, who subsequently lost his reelection campaign.

If Schumer demands a price for the $1.6 billion, he will be pressuring Trump to trade a series of wage-cutting amnesty concessions in exchange for a wall that cannot stop catch-and-release for the migrants who simply ask for asylum.

The GOP’s business-first leaders are offering minimal support to Trump’s wall, just as they have avoided Trump’s pro-American immigration agenda since November 2016. Since 2016, GOP leaders have tacitly conceded to Democratic demands on migration to help ease the passage of business priorities, such as the tax cut and the confirmation of conservative judges.

“I can’t imagine, with all the things that we have to do here to wrap up this Congress, that we would revisit immigration, but who knows?” Senate Majority Leader Mitch McConnell said November 7.

Third-ranking GOP leader Sen. John Thune managed to show even less enthusiasm for border wall funding, according to The Hill:

“It would be nice if we get a budget deal that includes wall funding,” he said. “We’ll see what the traffic will bear when we get into the discussion. We have to do a budget to wrap up the year and some other cats.”

The caravan didn’t arrive before the election–but they arrived just in time for the border wall debate in the lame duck Congress.

Wall, who needs a wall? pic.twitter.com/1q6rVAkb26

In contrast, GOP Sen. Lindsey Graham is enthusiastically pushing for a business-backed, DACA-amnesty-for-small-wall deal during the December lame-duck session. According to the Washington Examiner:

“You have two problems, you have a gap in funding between the House and Senate on the wall,” Graham told the Washington Examiner. “And you might as well go ahead and deal with [Dreamers] at the same time. You’ve got to give something to get something. You’ll get your wall money if you do something on DACA.”

From 2012 to 2014, Graham organized and pushed the “Gang of Eight” amnesty which intentionally tried to flood the labor market and so shift more of the nation’s annual income from workers to investors. For example, his amnesty bill also allowed an unlimited number of foreign-born college-graduates to get green cards and allowed presidents and border officials to provide asylum to an unlimited number of migrants.

In the House, GOP leader Rep. Tom Cole is also pushing the investor-boosting DACA-for-wall deal — even though the DACA amnesty would add at least three million Latinos to the voting rolls during the next decade.

Some House legislators are also backing a series of expanded visa worker programs that would cut wages for white-collar graduates, blue-collar laborers, and farm workers.