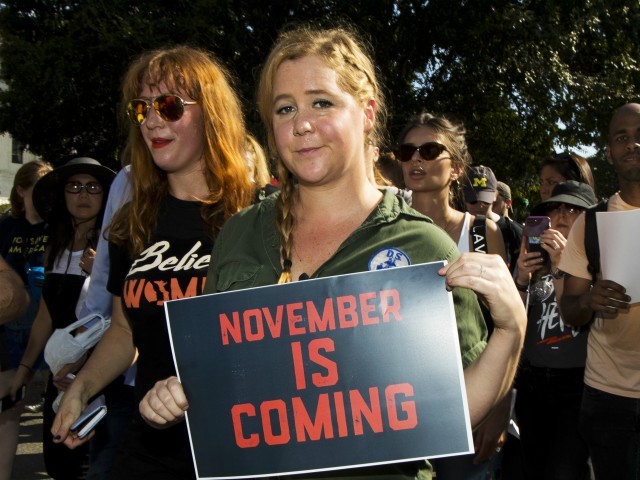 Actress Amy Schumer announced her pregnancy by endorsing a number of Democrat candidates on Instagram Monday.

“About to announce some exciting news on @jessicayellin insta page. Please follow her for up to the minute #newsnotnoise she breaks down what’s really going on. She agreed to post a lil noise today for me! Follow her and VOTE!!” Amy Schumer wrote in an Instagram post.

Following her link to veteran reporter Jessica Yellin’s Instagram page, you can view her story which contains an iPhone screenshot listing a number of candidates that Amy Schumer endorses, including Democrats Kirsten Gillibrand, Andrew Gillum, and Beto O’Rourke.

At the bottom of the note, Schumer simply wrote, “I’m pregnant-Amy Schumer.”

I’m in the business of covering news not noise, but sometimes some happy noise comes along and you just have to share… Congrats @amyschumer!! 👶👶👶https://t.co/vewOWx5nel pic.twitter.com/RT5jjtbtOn

The 37-year-old actress most recently made headlines for saying that white NFL players who don’t kneel during the National Anthem are “complicit” in racism.

“I wonder why more white players aren’t kneeling. Once you witness the truly deep inequality and endless racism people of color face in our country, not to mention the police brutality and murders. Why not kneel next to your brothers? Otherwise how are you not complicit?” the Inside Amy Schumer star said.

The Trainwreck star also attended anti-Brett Kavanaugh protests in Washington D.C., agreeing to be arrested outside the Supreme Court.

In case you forgot about Schumer protesting, she uploaded a commemorative video of herself protesting on Twitter.