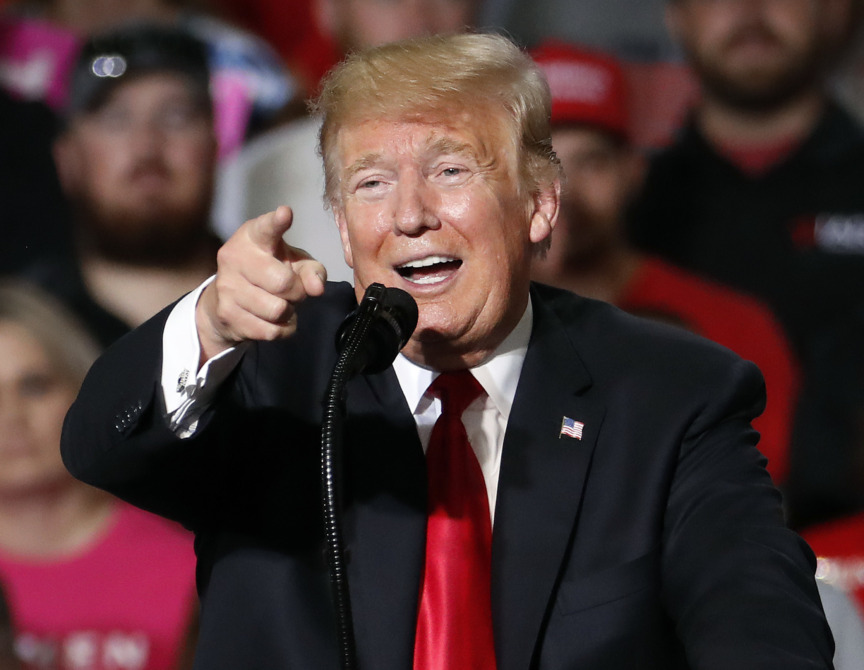 President Donald Trump will hold a massive Monday evening rally in Houston, Texas, for Sen. Ted Cruz (R-TX). Organizers had to change the venue to the 18,000-seat Toyota center after more than 100,000 people requested tickets.

Trump will head to Wisconsin (Wednesday) and North Carolina (Friday) for more rallies later in the week.

Trump has also called O’Rourke, the darling of white left-wing Hollywood elites and their media allies who share his sensibilities, a “lightweight.”

Massive crowds inside and outside of the @ToyotaCenter in Houston, Texas. Landing shortly – see everyone soon! #MAGA🇺🇸https://t.co/0pWiwCq4MH pic.twitter.com/tj5S6Z2GY7

7:45 PM: Cruz takes the stage and reminds the crowd that today is the first day of early voting. “God Bless Texas. And God Bless President Donald Trump,” he says.

Lt. Gov. @DanPatrick at the Houston Trump rally: 16,000 inside. 15,000 outside. “Nearly 100,000 people asked to get a ticket to this event tonight. Why are we here? To tell @BetoORourke and the Democrats we’re not turning Texas into California.”

7:03 PM: Texas Governor Greg Abbott firing up the crowd: “Isn’t it great to be with patriots who pray to God almighty and who would never take a knee for our national anthem?” Abbott says he’s more powerful than Putin because Texas’s economy is bigger than Russia’s. Now talking about working with Trump to secure the border and banning sanctuary cities. Abbott now mentioning all of the California money that’s funding O’Rourke and says O’Rourke is “hostile to Texas values.” He says all of the gold pouring in from California can’t buy Beto a Senate seat in the Lone Star State. Asks voters to keep Texas “as red as the MAGA caps you are wearing tonight.”

First to bring up @tedcruz and @BetoORourke race tonight is @GovAbbott. He says that “gold pouring in from California” can’t buy Beto a senate seat. #KAGS #TrumpHouston pic.twitter.com/MQGMLt1bL1

7:00 PM: Trump rally like a bigger College GameDay experience (Trump supporters as excited as Cougar fans were at The Palouse this weekend). Would be amazing to see how packed College Station would be if Trump ever held a rally there. This could be the most energetic event at the Toyota Center (home of the Houston Rockets) this year because of Carmelo Anthony’s well-known defensive liabilities (Houston already sorely missing the underrated Luc Mbah a Moute’s defense) and inability to move the ball around.

WATCH: Long line to get into President Trump’s campaign rally in Texas tonight, including many people who slept in the line overnight. pic.twitter.com/vkLBBXQCqu

Trump and Cruz getting ready to head to the Toyota Center:

Sen. Ted Cruz was on hand to greet Pres. Trump at Ellington Field in Houston ahead of tonight’s campaign rally. https://t.co/NkJuIoh4fP pic.twitter.com/ieGf4GZskK

Seeing lots of Hispanics and Asian Americans wearing MAGA hats mingled in the huge crowd of @realDonaldTrump fans outside of Toyota Center in #Houston pic.twitter.com/rZjLLo9y8G

.@TedCruz, wearing black Cowboy boots, greeted Trump at the base of the stairs. Smiles all around. Cruz got in the limo with Trump — Per pooler @djusatoday #HoustonRally

People at the front of this #MAGA rally line have been here since NOON on Sunday! Hundreds already here. Doors open at 3:30. #abc13 https://t.co/GE0l5DzLgA pic.twitter.com/RtfyTXFlUo

Trump supporters are already lined up for blocks in Downtown Houston. Excuse the grainy phone photos taken mid-uber, but it’s already pretty active and multiple streets are blocked off by police ahead of tomorrow’s rally pic.twitter.com/IT2e7RDZqq

I’ve met people from Arkansas, Michigan, Kansas already. “I wouldn’t miss this for the world,” one woman told me. #abc13 #TrumpInHouston pic.twitter.com/wWZNoNRiKL

The line to get into the Trump/Cruz rally tonight in Houston. First person got here YESTERDAY morning pic.twitter.com/eq8ysg1IPn

This is a gender neutral voting booth outside the Trump-Cruz rally right now in #Houston. pic.twitter.com/78YSbpjObZ

View from above of the long, snaking lines of Trump supporters waiting to get into tonight’s #MAGA rally in Houston, Texas pic.twitter.com/ZpD4209ZfV

#HoustonRally @houstonpolice Every time the State Troopers walk by the crowd cheers them and thanks them for their service. Nothing but love. Cheering the police. Kinda cool. ♥️🇺🇸♥️🇺🇸. People talking selfies with them. They’re rock stars. pic.twitter.com/0CML66uhbx