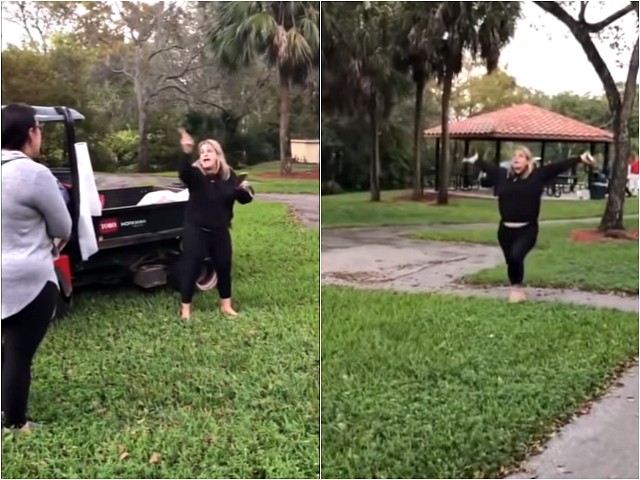 A group of eight Florida residents taking their Christmas photos in a public park got an earful from one woman who started screaming and cursing at them because she claimed they were breaking the law, according to a video.

The video showed a woman screaming at the group of eight people, including children, for using Orchard Park in Coral Springs, Florida, as their personal photo backdrop last Sunday, and she accused them of using the park to shoot photos the day before.

“Every week, they were here yesterday … yesterday! Every weekend,” shouted the irate woman, Debbie DeCaro, while resident Angel Ruiz caught the spectacle on video.

“Every f**king day. This is not your studio,” DeCaro added.

The group of eight — which included Ruiz, his girlfriend Nickolette Mottola, and six others — had been taking photos in the park using a crate and a small Christmas tree as props for the children posing for the photo.

Ruiz insisted he was not at the park the day before and had not been taking any professional photos.

“We were leaving, and this lady appears and starts screaming at us and spewing profanity,” Ruiz told Coral Spring Talk.

Mottola does own a professional photography company and has a Facebook page advertising the business. Mottola, however, said there were six others taking photos at the park that day as well.

The city of Coral Springs has a rule that families can take photos in public parks freely, but professional photographers need a permit.

“If they are operating as a professional, then we inform them of this,” said Louis Goldstein, the assistant director of parks and recreation for the City of Coral Springs.

“We’ll speak with the neighbor if necessary,” he added.