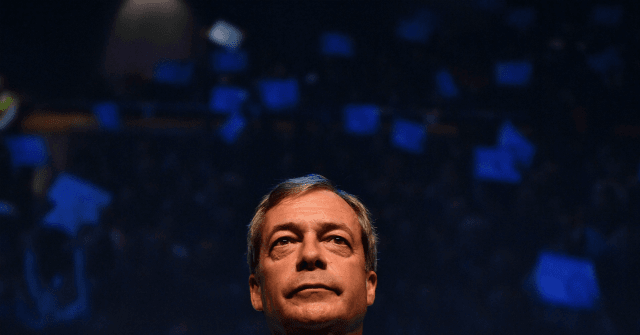 STRASBOURG, France — Brexit leader Nigel Farage, who had a milkshake thrown in his face during the 2019 UK elections, told Breitbart the increasingly violent attacks by the left on Andy Ngo and others are damaging democracy.

Nigel Farage, who warned at the time of the assault against him that the normalisation of low-level intimidation and violence against public figures would inevitably lead to worse attacks told Breitbart London the assault on U.S. publication Quilette journalist Andy Ngo was “really, really seriously bad.”

Ngo, who described himself as a “gay journalist of color” was beaten around the head and kicked while covering a hard-left ‘Antifa’ March in Portland, Oregon on Saturday. As he moved away from his attackers, Mr Ngo had a milkshake thrown in his face and was sprayed with silly string, video captured at the scene shows. He told media that he was hospitalised with a brain hemorrhage and has extensive visible bruising on his face and neck.

Mr Farage warned that the attacks were a clear warning sign about the health of Western democracies, which to function properly need “losers consent” — that is to say, those who lose elections or referendums to accept the results. Far from that being the case in the United Kingdom, Mr Farage — who was the public face of a long-term campaign to get Britain out of the European Union — has become a major target of the left since winning the 2016 referendum to leave the EU.

In the aftermath of Mr Farage being doused in milkshake earlier this year, suggestions that battery acid rather than milkshake could be thrown at right-wing figures went viral, and were even made on a state radio ‘comedy’ programme.

Mr Farage said he absolutely supported free speech and the right to be offended, but told Breitbart London that incitement to violence and actual violence were not part of a healthy democracy. He said Wednesday: “I expect to be shouted at, that’s fine, that’s all part of being a public figure, being a campaigner.

“But I think we’re in a very, very bad place with this and I think there’s a big responsibility of many on the other side of the argument to me to say to their supporters: ‘desist. This is very, very dangerous and it’s damaging democracy in a serious way’.”