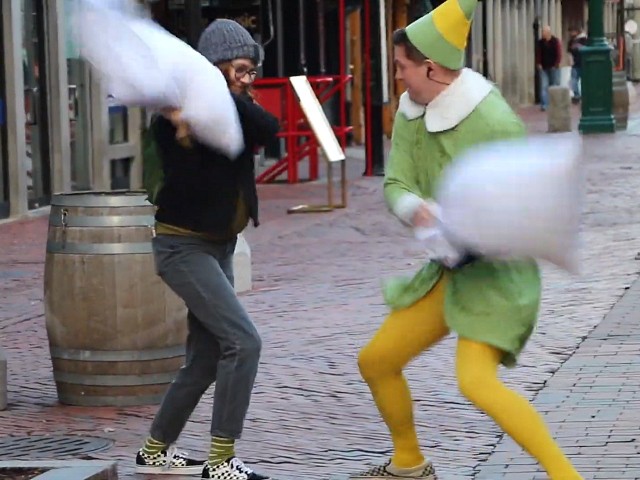 Boston firefighter Brendan Sullivan, dressed as “Buddy” from the Will Ferrell movie Elf, tried to start a Christmas pillow fight at Faneuil Hall.

The video shows Sullivan as the irrepressibly jolly Buddy, doing his best to earn some smiles during a hectic holiday season in Boston, Massachusetts. “I said why don’t we do pillow fights with strangers featuring Buddy the Elf,” Sullivan told 7News. “And that’s what we rolled with.”

Sullivan offered everyone the chance for a pillow fight, but his favorite was an elderly woman. “I had her hit me with the pillow and I fell to the ground,” he remembered, smiling. “When she helped me up I came in with the sneak attack.”

Of course, even elves get hungry. “We needed to stop and get something to eat, so we walked into a restaurant and people, they couldn’t not turn their head and stare because Buddy the Elf was eating a sandwich at a bar,” he said. Of course, they may have been expecting him to stick to the four elf food groups.

Sullivan will repeat his shenanigans every week until Christmas. “We just wanted to spread holiday cheer, make people laugh, smile,” he said. “That’s what we’re out there for.”