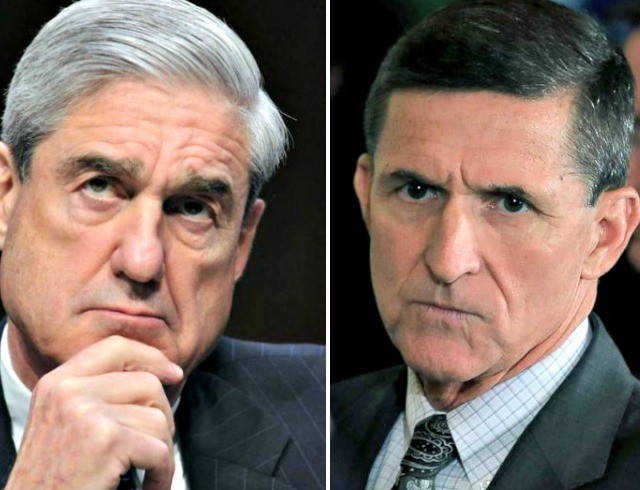 Leading up to its release, resisters were giddy over the idea the man who led a “Lock her up!” chant on the campaign trail would find himself behind bars. Mueller’s memo instead praised him for his substantial cooperation and “exemplary” service in uniform, leaving some angry.

I cannot express how disappointed I am that #Flynn is not going to prison.

Many Democrats took to Twitter to convey their unfulfilled vengeance towards Flynn, who was once appointed by former President Barack Obama to lead the Defense Intelligence Agency.

Perhaps it is because I have spent so much of my life studying national security advisors, but I can’t minimize my contempt for Mike Flynn nor my outrage at his behavior–regardless of his cooperation with Mueller.

Ultimately, the resistance — who had built Flynn up to be a pivotal figure in the Russian collusion scheme and the Deep State’s first scalp of the Trump administration — was left with yet another Trump adviser whose crimes were not related to collusion, but to lying to investigators.

It is also not clear whether Flynn truly lied to investigators – the crime he pleaded guilty to. Both former FBI Director James Comey and former FBI Deputy Director Andrew McCabe told House Intelligence Committee investigators that they believed Flynn had not lied to the FBI when he was interviewed by two agents on January 24, 2017, according to the committee’s final report.

Flynn also had an incentive to plead guilty to lying: Mueller had also reportedly threatened to prosecute his son, Michael Flynn Jr., and Flynn’s siblings talked openly about how fighting the allegations against him were leading him to financial ruin.

Flynn’s brother, Joe Flynn, sent out a series of tweets on Tuesday after Mueller’s memo was released that suggested Flynn did not do anything wrong:

Correct @johncardillo . the entire Democratic Establishment and their friends in the MSM, have made it a favorite pastime to lie about @GenFlynn and diminish his impeccable military career… Watch as the smear campaign heats up again in the next few weeks, Our day will come! https://t.co/3wHyFaUbEO

Some resisters tried to argue that Flynn’s individual lobbying work for Turkey during the time he was a campaign adviser was bad enough.

“The Flynn memo makes clear that the Trump campaign had a National Security Adviser who WAS ON THE PAYROLL OF A FOREIGN GOVERNMENT. At the same time Trump was pursuing a financial deal in Russia without disclosing it. How many countries were pulling strings behind the scenes?!?” tweeted former FBI special agent Asha Rappanga on Tuesday.

The ongoing investigations are not yet known, since portions of the memo discussing them were redacted. Resisters are pointing to those portions as evidence that something big is in the works.

However, legal experts and some journalists say no one knows exactly what those investigations could be, but they are likely not related to collusion. Yahoo chief investigative correspondent Michael Isikoff told CNN’s Chris Cuomo Tuesday:

There are three investigations referenced for which Flynn has provided cooperation. One is completely redacted. We don’t know what it is. … The second is the special counsel investigation into collusion, links between the Trump campaign and the Russians — that is not redacted. And then there’s a third one, again, totally redacted.

So, the way I read this, the ongoing investigations which are not itemized here, are what Flynn is providing continuing assistance to, but it’s not the Russian coordination investigation, because that is spelled out and not redacted.

“If there was a there there, as it related to him, and others, it would have been likely he would have been charged with conspiracy as well, thereby implicating others as part of that conspiracy. You didn’t see that here, and I think that’s fairly significant,” he said.

House Freedom Caucus Chairman Mark Meadows (R-NC) said the fact there is no collusion suggested good news for Trump, since Flynn served on the campaign and the transition — the period that Mueller is investigating for collusion.

“Let’s look at what’s not in [the report],” Meadows said Tuesday evening on Fox News Channel’s Hannity. “There is no suggestion that Michael Flynn had anything to do with collusion. He was with the transition team. He was part of the campaign. And yet there is no mention of collusion,” he said.

Legal experts also point out that if Mueller wants to make a conspiracy charge against Trump, he would likely make a deal with his associates to get them to plead guilty to being part of the conspiracy, to establish that it exists.

Yet, so far, Flynn, former Trump lawyer Michael Cohen, and former advisers George Papadopoulos and Paul Manafort were all charged with lying to investigators and financial-related crimes — which would harm their credibility and any claims that a conspiracy existed.

Andrew McCarthy, former federal prosecutor and senior fellow at the National Review Institute, wrote last week that Mueller’s goal is not to build a criminal case, but a report that will suggest — but not prove — collusion.

“No prosecutor builds a case the way Mueller is going about it,” McCarthy wrote. “What prosecutor says, ‘Here’s our witness line-up: Michael Flynn, George Papadopoulos, Alex van der Zwaan, Rick Gates, Paul Manafort, Michael Cohen. And what is it that they have in common, ladies and gentlemen of the jury? Bingo! They’re all convicted liars’?”

“The report will detail disturbing — and thus politically damaging — connections between Trump associates and Kremlin cronies. But there will be no collusion crime, and thus no charges and no need for witnesses,” he wrote.

“The false-statements pleas create the illusion of a collusion crime, and thus appear to vindicate Mueller’s sprawling investigation,” he added.

Also notably missing from the memo is any mention of illegality in how the FBI came to investigate Flynn in the first place.

Someone privy to classified information had first illegally leaked the contents of Flynn’s call with Russian Ambassador Sergei Kislyak on December 26, 2016, to the Washington Post‘s David Ignatius, which he wrote about on January 12, 2017, suggesting a potential violation of an arcane law known as the Logan Act, which prohibits private citizens from engaging in foreign diplomacy.

FBI investigators — who were already secretly investigating the Trump campaign — then used the article as a justification to interview Flynn on January 24, 2017. When public statements made by Vice President Mike Pence purportedly did not match with what Flynn had either told investigators or said to Kisylak, Flynn was fired for lying to Pence, and later, charged by Mueller for lying to investigators.

On Wednesday, Ignatius, the journalist who publicized the illegal leak that gave the FBI justification to investigate Flynn, wrote a column that seemed to oddly distance himself from the role he played in Flynn’s investigation.

Ignatius wrote about his own column:

A buried paragraph in an op-ed column started Flynn’s cascade of problems: He lied about his contacts with Kislyak in an FBI interview on Jan. 24, 2017, and was fired as national security adviser, charged with lying by Mueller and pleaded guilty. The odd part was that the seeming trigger for these big consequences was the relatively small matter of the Logan Act, an 18th-century heirloom that has never been enforced with criminal prosecution in modern times. I guess it’s one more example of the abiding lesson of political scandals that it’s not the initial activity that gets people in real trouble, but the attempt to cover it up.

While Ignatius wrote that it was “odd” that the Logan Act was the “seeming trigger” for the investigation of Flynn, he himself had questioned whether Flynn had violated the law in his original January 12, 2016, column:

The Logan Act (though never enforced) bars U.S. citizens from correspondence intending to influence a foreign government about “disputes” with the United States. Was its spirit violated? The Trump campaign didn’t immediately respond to a request for comment.

A Republican congressional staffer scoffed at his seeming confusion.

“Ignatius feigns bewilderment at how the ‘relatively small matter’ of the archaic Logan Act resulted in Flynn’s prosecution. That’s the point — Flynn’s enemies in the deep state and the media initiated the whole attack on him by portraying his innocuous call with Kislyak as an abominable violation of the Logan Act,” the staffer said.

“It’s a ridiculous accusation, but the media hyped it shamelessly. It’s hard to believe Ignatius doesn’t understand that, since he and his leakers were the ones who started the attack,” the staffer said.