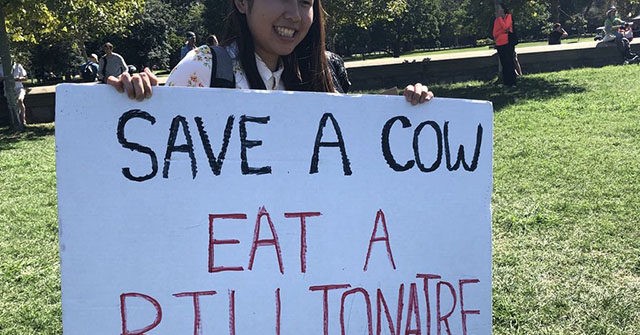 A chant of “don’t eat cows; eat the rich” could be heard from a small group of young climate activists gathered in Washington, DC, to take part in the global climate strike on Friday.

As they chanted, they displayed signs that read, “Burning our future,” and, “Stop denying earth is dying.”

People from all around the world, including youth activists, took to the streets Friday to demand action against climate change, just three days before the U.N. Climate Summit in New York City.

The climate strike, dubbed #StrikeWithUs, has a goal to “demand a right to a future,” according to the strike’s website.

Among the most notable of the organizers is 16-year-old Swedish climate activist Greta Thunberg, who testified before Congress on Wednesday and also met with former President Barack Obama earlier this week.

In addition to the climate strike occurring in D.C., other strikes are taking place in New York, Los Angeles, London, Berlin, Moscow, and Hong Kong. To watch the D.C. climate strike, click here.