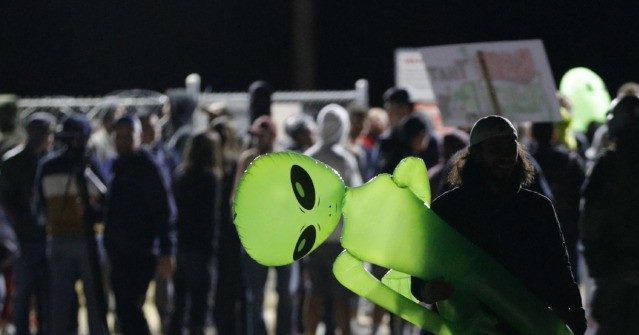 A group of 100 alien enthusiasts gathered at Area 51 in Nevada early Friday morning to follow through with the Storm Area 51 plan originally meant as a joke.

Law enforcement officers blocked the road about a mile from the gate, with attendees walking the rest of the way. About a dozen officers were stationed at the gate, ready to act if anyone tried to breach the area. At the strike of 3 a.m. an officer with a police dog in tow, walked up from inside of the gates.

The report also stated that officers at the gate kept the atmosphere light as participants took photos and held signs that read things such as “Predator or Prey?” and “Save ET from the Government.”

Authorities said that during the gathering, only one person was arrested for indecent exposure after they were caught urinating near the security gate.

However, last week in Nye County, Nevada, deputies arrested two Dutchmen who reportedly were in the area for the event. Both pleaded guilty to trespassing at a U.S. site that was not anywhere near Area 51 and were sentenced to three days in jail. The men also told authorities they would each pay the $2,300 in fines.

“I’ve been out a few months ago, but I had to come back. It’s pretty out here,” said 27-year-old Rebekah Scholes from Colorado. “I thought it would be interesting to see what happened.”

Video posted to Twitter showed participants as they appeared to “rush” the gate at the heavily protected site.

Here is the second #NarutoRun rush that happened this morning outside #area51.

The first rush of about 20 people happened this morning and they were so fast our camera didn’t catch them. pic.twitter.com/nO69XTsBsL

Matthew Roberts, the creator of the Facebook event page that went viral in June, said the page was removed by the platform because it “went against” the company’s “community standards.”

“They can’t stop all of us,” the page jokingly read before it was taken down. “Lets see them aliens.”

However, prior to its removal, more than 2 million people said they were interested in attending the event at U.S. Air Force testing site that has been a focus of UFO conspiracy theories for years.

“Here’s a big open space for people to be,” said Daniel Martinez, 31, of Pomona, California. “One person starts something and it infects everybody with positivity. Anything can happen if you give people a place to be.”