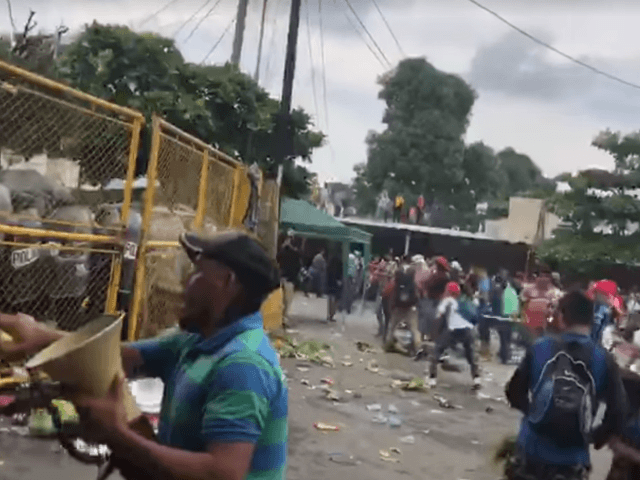 Hundreds of Central American migrants rushed through the border gate between Guatemala and Mexico as another large-scale caravan begins its march to the U.S. border. At this point, Mexican authorities appear to be holding the new caravan back.

Members of the new caravan can be seen throwing rocks and other projectiles at Guatemalan authorities who attempted to stop them from breaking through a locked border gate. Video taken by Mexico’s Azteca Noticias shows the initial moments of the clash.

A second video shows yet another clash at the gate as the migrants clashed with police forces.

The yellow gate is the last barrier in Guatemala before the migrants entered an international port of entry on top of the Suchiate River that divides the two countries. Mexican authorities continue to stand guard on their side of the gate in case the migrants attempt to break through by force.  The group formed the caravan to follow the lead of others in recent weeks. The initial caravan began in Honduras earlier this month and publicly stated they would not stop until they reach the U.S. border.

The initial caravan became a source of diplomatic tension after U.S. President Donald Trump threatened to withdraw international aid to Central American countries if the caravan was not stopped. Most recently, Mexico offered the migrants temporary jobs, education, and healthcare benefits if they agreed to legally apply for asylum and stay in the southern part of Mexico. As Breitbart News reported, the members of that first caravan declined the offer and stated that their goal is the U.S. border.