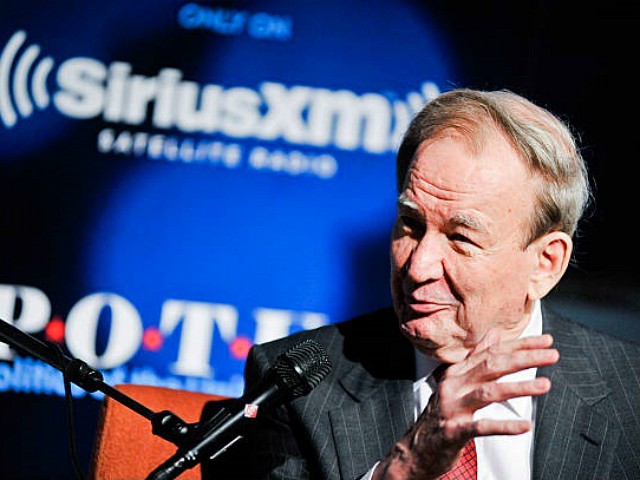 Populist conservative author and columnist Pat Buchanan says a caravan of at least 7,000 migrants has “no international right to come to the United States.”

During a panel discussion on The McLaughlin Group, Buchanan said the caravan of previously deported illegal aliens and job-seekers from Central America have no right to come to the U.S. or enter the country.
Buchanan said:

They have no international right to come to the United States of America. If the young men of Honduras don’t like their government, why don’t they overthrow it the way we overthrew the British. [Emphasis added]

Buchanan also called immigration “the most powerful issue in the Western world,” saying that President Trump should be discussing the caravan — designed to overwhelm the country’s asylum and immigration system — ahead of the midterm elections.

“The idea of third world peoples coming across the Mediterranean, coming across the Rio Grande, changing the character of countries and things,” Buchanan said. “This has all of Europe up in … arms, it’s creating new parties, it drove Trump as president of the United States because is he making political hay out of it? He is and he should because it’s a graphic example and that’s why the TV cameras are down there.”

As Breitbart News has chronicled, the caravan migrants have repeatedly admitted that their goal is to enter the U.S. to get a job and escape crime in their native countries in Central America. Neither of these are eligible cases for asylum. An organizer called the group of thousands of Central Americans a “mass exodus” out of the region to the U.S., suggesting that this is not a humanitarian crisis, but rather an economic migration.

President Trump is expected to announce an executive order this week that will halt the flow of the caravan into the U.S. on grounds of national security.