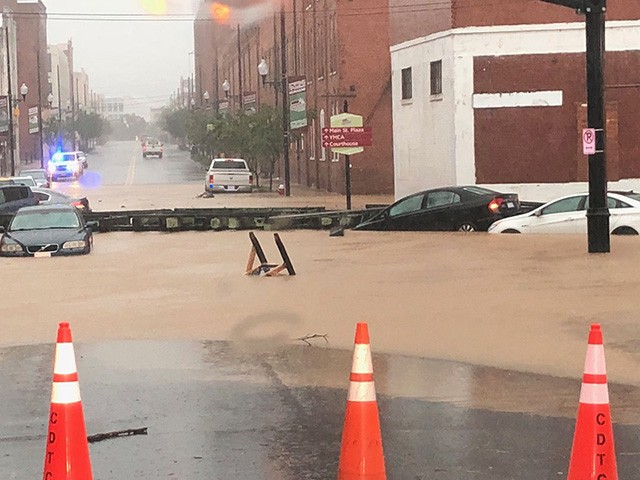 Parts of Danville, Virginia, are submerged in floodwaters after Tropical Storm Michael brought heavy rain and wind to the area Thursday afternoon.

Danville Utilities estimate roughly 20,000 customers are without power Friday with flash flood warnings still in effect throughout parts of southern Virginia, including Blacksburg and Roanoke. “A *FLASH FLOOD EMERGENCY* is in effect for southern Pittsylvania County & the City of Danville. Extreme flooding is occurring in the warned area with multiple ongoing swift water rescues according to county officials. This is an EXTREMELY DANGEROUS SITUATION!” The National Weather Service’s Blacksburg branch tweeted.

Earlier Friday, the agency warned residents to beware of 40 mph wind gusts, which could cause frees to fall.

Danville Police say personnel is moving quickly to recuse stranded drivers and those trapped by surge flooding. One person has reportedly drowned to death.

Stunning scenes from around Danville are making the rounds on social media:

STATE OF EMERGENCY: Danville is currently under a local state of emergency — the Danville Animal Shelter has also been FLOODED. https://t.co/FRx2T5VQ58 pic.twitter.com/LquvqnvG2z

FLOODING IN DANVILLE: Here are photos of views around Danville after rain dumped on the area — the city has declared a local state of emergency.

Swift water teams headed out in Danville, according to @AshleyAReports who’s reporting from a flooded Riverside Dr where cars are stranded. pic.twitter.com/TClHni89p2

Residents on Nelson Avenue had to EVACUATE due to flooding in Danville — water started rushing into the basement!

URGENT PLEA: Danville Police Chief Scott Booth is asking all residents and visitors to STAY OFF the roads in Danville tnoight.

Streets are blocked or partially blocked due to fallen trees, mud slides, and debris on the roads. Travel will be more dangerous after sunset. pic.twitter.com/YRaQnpygC4

Danville took a hit today as the remnants of Michael headed north: high water, uprooted trees, power lines down in many areas. pic.twitter.com/IY8NNI5Jpb

Bottom of Main St. Please do not travel into flooded areas. pic.twitter.com/aq6tDujPVm

Scary. Linda Baldwin said this massive tree fell in front of her home on Wilton Ave. in Danville and crushed her neighbor’s truck — who was passing by. It impaled his thigh and Baldwin said she and her son got their neighbor to the ER.

She said ‘he is very lucky to be alive.’ pic.twitter.com/mpDlpYxh1Q

My neighborhood is completely underwater in #DanvilleVA. Trees down across the road in multiple places. Massive flooding. Worst I’ve seen here in a long, long time. pic.twitter.com/eqlEah7t1L

The sun is starting to pop out above Danville. pic.twitter.com/tuhHELX7HI

Many swift water rescues were underway in Danville today due to heavy floodwaters. pic.twitter.com/j5nVpy2aPJ

Joey Harris of Danville shot and shared this video on Piney Forest next to the mall. @ABC13News pic.twitter.com/JSYLqs9rlp

This is crazy! An old set of train tracks floated onto Main Street in Danville 😮

This is North Main Street in Danville. The power is all out. Only lights are from cars. pic.twitter.com/W2Dy9P0ZGa

According the the City of Danville, the Dan River is at 29.9 feet pic.twitter.com/hyCaPr6r0c

Crazy video: floodwaters pushed open the front doors of Supply Resources in Danville. The owner showed us inside as he was cleaning up. Everything is caked in mud and destroyed. pic.twitter.com/BIBXHPQaIk

The side of the building has been swept away! pic.twitter.com/FjoshpLxjX

Downed power lines like these are all around the Danville area -this one on Audubon Dr. @WFXRnews pic.twitter.com/5Jlunx5dCg

In this video you can see a centuries old train trestle float across Craghead Street. This is historic flooding for Danville and it’s definitely leaving its mark on some of the city’s richest history.
📸: Yolanda Ross pic.twitter.com/Ts0BClbk9m

I’m at the intersection of Advance St and Trade St in Danville with the tallest water we’ve seen – about calf deep. @WFXRnews pic.twitter.com/osfkHA06kD

Headed to Danville in complete darkness… Traffic lights still out. At least 13,000 still without power. Tune in to #GoodDayVirginia to see damage from Danville. @WFXRnews pic.twitter.com/hQ5LPFKiqd

Public works crews out on River Street in Danville where the road is still flooded. pic.twitter.com/4MhhvFyPEK

This is the line at Crema & Vine in Danville. It’s one of the only places in the city that has power and can serve breakfast/coffee this morning. Can’t wait to get ☕️🍳 pic.twitter.com/6For8F7Lr2

I spent five hours in the car yesterday getting from Lynchburg to Danville. The roads are in bad condition- many remain closed this morning. Here’s a look at what I saw in Lynchburg, Halifax County, Pittsylvania County and Danville. pic.twitter.com/hVHa4v5CYM

Downtown, once a booming trade district, today is a decomposed industrial husk, a tidy cluster of silent rectangles ensnared by broad, ghostly thoroughfares built for a time in the not-so-distant past when people and goods poured in and out of town.

This year, citing demand, the city of Danville announced plans to open a second homeless shelter. The city’s population, at 41,000, has been in freefall since NAFTA, with 10,000 fewer residents today than in the mid-90s, and many of those who’ve remained were only able to do so because of retirement packages from Dan River Mills.