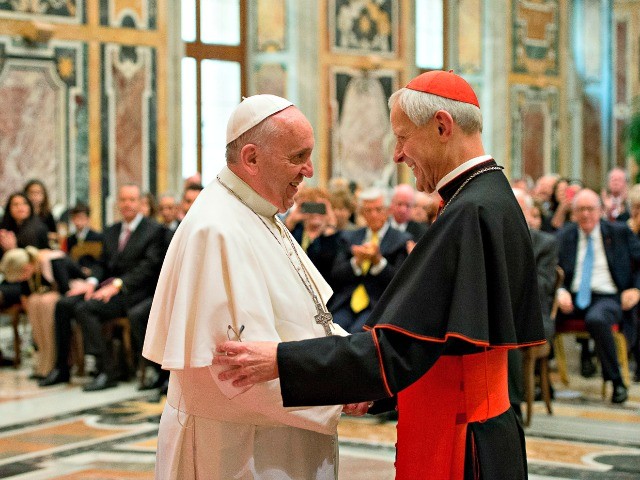 ROME — Pope Francis accepted the resignation of Washington, DC, Cardinal Donald Wuerl on Friday but asked him to stay on as “Apostolic Administrator” of the archdiocese until a permanent successor is appointed.

In his October 12 letter, Pope Francis thanked the cardinal for his service and praised the way he has dealt with accusations of having mishandled the sex abuse crisis.

As required by Church law, Cardinal Wuerl had submitted his resignation to the pope on November 12, 2015, when he turned 75 years old, but the pope asked him to stay put.

Last month, Wuerl announced his upcoming retirement, saying he intended to travel to Rome to discuss with Pope Francis his departure from the Washington Archdiocese.

“I intend, in the very near future, to go to Rome to meet with our Holy Father about the resignation I presented nearly three years ago,” Wuerl explained in a letter to the priests of the archdiocese.

The cardinal said that the decision to remove himself from his leadership role came as fruit of discernment regarding “the best course of action for me to pursue as we face new revelations of the extent of the horror of the clergy abuse of children and the failures in episcopal oversight.”

Wuerl had been implicated in a recent Pennsylvania grand jury report on clergy sexual abuse, which claimed that he had approved transfers for abusing priests instead of removing them from ministry. It also alleged that he concealed information from law enforcement when priests were reported and oversaw insufficient church investigations into abuse.

By late August, nearly 80,000 people had signed a Change.org petition urging Pope Francis to remove Cardinal Wuerl from his post as archbishop of Washington, DC.

The petition said that Wuerl should be removed from his position for allegedly covering up the sexual abuse of minors and paying off clergy to lie about their stories while serving as bishop of Pittsburgh.

“Cardinal Wuerl did not act with moral courage to remove predator priests from public ministry. Decades later, his failure to lead has scandalized the Church,” the petition said.

The Pope noted in his letter Friday that he had received a September 21 request from Cardinal Wuerl that his resignation be accepted and lauded the prelate for having sought the good of the Church.

“This request rests on two pillars that have marked and continue to mark your ministry: to seek in all things the greater glory of God and to procure the good of the people entrusted to your care,” Francis wrote.

In his letter, the pope also defended the cardinal against accusations of cover-up of sexual abuse, saying there is a difference between covering up and making “mistakes.”

“You have sufficient elements to ‘justify’ your actions and distinguish between what it means to cover up crimes or not to deal with problems, and to commit some mistakes,” he said. “However, your nobility has led you not to choose this way of defense. Of this, I am proud and thank you.”

“Your renunciation is a sign of your availability and docility to the Spirit who continues to act in his Church,” he added.

Cardinal Wuerl responded to the pope’s letter Friday with his own statement, in which he said that that “the Holy Father’s decision to provide new leadership to the Archdiocese can allow all of the faithful, clergy, religious and lay, to focus on healing and the future. It permits this local Church to move forward.”

“Once again for any past errors in judgment I apologize and ask for pardon,” he said. “My resignation is one way to express my great and abiding love for you the people of the Church of Washington.”