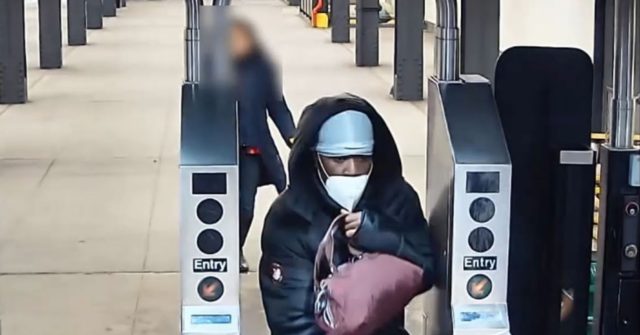 A woman was mugged by a person wielding a knife as she waited for a train inside an Upper Manhattan subway station, law enforcement said Monday.

The incident took place at approximately 6:00 p.m. on Thursday at the West 163rd Street location in Washington Heights. The suspect flashed a knife and tried to snatch the woman’s phone, according to police, the New York Post reported.

Following a struggle, the alleged mugger fled the scene with her purse and it was eventually found empty, authorities noted.

“An unknown amount of money was taken, police said. The woman was uninjured,” the Post report added.

Surveillance footage of the incident showed the suspect, wearing a black coat and white shoes, run off with the maroon colored bag and push his way through a turnstile.

However, during a recent interview on MSNBC’s Morning Joe, Adams said morale among officers was low and “it’s challenging to have someone commit a crime repeatedly, and you see them out on the next day, carry a gun, then they’re out the next day. That impacts your morale.”

A large number of arrest criminal suspects freed from jail due to New York’s “bail reform” law that wiped out bail for numerous crimes, were eventually rearrested over additional criminal charges, according to state records, Breitbart News reported.

Adams has urged the state’s lawmakers and Gov. Hochul to change the law “so that criminal court judges have more discretion over setting bail for suspects that they believe will go on to commit more crimes,” the outlet said.

However, state Democrats and Hochul have turned a blind eye to Adams’ request, according to the report.