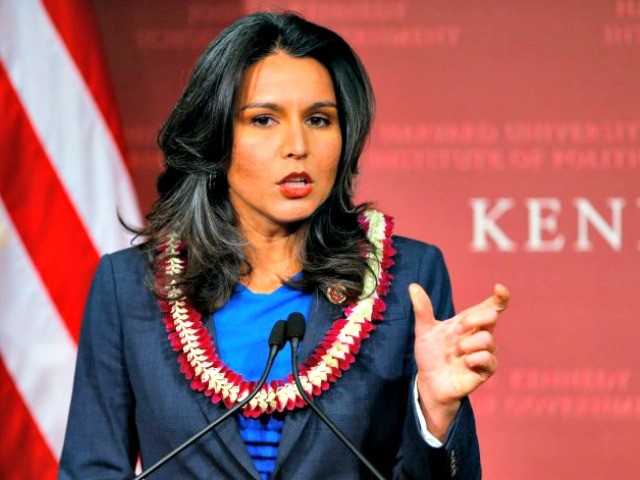 Rep. Tulsi Gabbard (D-HI), among Congress’s most anti-war and progressive lawmakers, criticized President Donald Trump’s refusal to bring a putative action against Saudi Arabia for the killing of Washington Post contributor Jamal Khashoggi, tweeting to the president that being the kingdom’s “bitch” is not “America First.”

Hey @realdonaldtrump: being Saudi Arabia’s bitch is not “America First.”

Gabbard was elected to the U.S. House in 2012. She is one of the first female combat veterans to serve in Congress, after deploying to Iraq and Kuwait.

President Donald Trump declared Tuesday he would not further punish Saudi Arabia for the murder of U.S.-based columnist Jamal Khashoggi — making clear in an exclamation-filled statement the benefits of good relations with the kingdom outweigh the possibility its crown prince ordered the killing.

The president condemned the brutal slaying of Khashoggi inside the Saudi consulate in Istanbul as a “horrible crime … that our country does not condone.” But he rejected calls by many in Congress, including members of his own party, for a tougher response, and also dismissed reports from U.S. intelligence agencies that Crown Prince Mohammed bin Salman must have at least known about such an audacious and intricate plot.

“It could very well be that the crown prince had knowledge of this tragic event,” the president said. “Maybe he did and maybe he didn’t!”

It came after weeks of debate over whether the president would or should come down hard on the Saudis and the crown prince in response to the killing of the Saudi columnist for the Washington Post who had criticized the royal family.

The U.S. earlier sanctioned 17 Saudi officials suspected of being responsible for or complicit in the Oct. 2 killing, but members of Congress have called for harsher actions, including canceling arms sales.

Trump said “foolishly canceling these contracts” worth billions of dollars would only benefit Russia and China, which would be next in line to supply the weapons.

The U.S. needs a “counterbalance” to Iran, “and Israel needs help, too,” the president added. “If we abandon Saudi Arabia, it would be a terrible mistake.”

President Trump said that King Salman and Crown Prince Mohammed both “vigorously deny” any knowledge of the planning or execution of the killing. He also said the CIA has not made a conclusive determination about whether the crown prince ordered it.

“We may never know all of the facts surrounding the murder of Mr. Jamal Khashoggi,” Trump said. “In any case, our relationship is with the Kingdom of Saudi Arabia. They have been a great ally in our very important fight against Iran.”

Saudi prosecutors say a 15-man team sent to Istanbul exceeded its authority when the lead negotiator in the team decided to kill Khashoggi for refusing orders to return. The Saudis say the agents dismembered his body, which has not been found.

Secretary of State Mike Pompeo defended Trump’s decision, saying, “We are determined to ensure that we continue to make sure that we take care of the American people in all of the strategic decisions we make about with whom we work with around the world.”