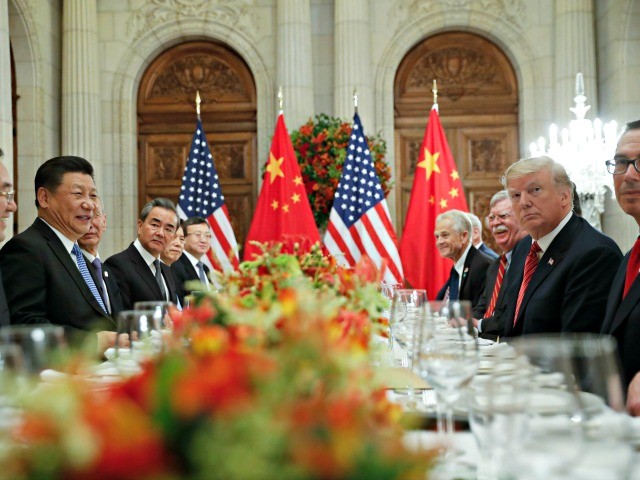 The White House announced Saturday that President Trump has agreed not to further raise tariffs on $200 billion worth of Chinese imports from ten percent to 25 percent as he had previously threatened, after a dinner meeting at the G-20 summit with Chinese President Xi Jinping.

In exchange, China will agree to purchase a “not yet agreed upon, but very substantial” amount of agricultural, energy, industrial, and other product from the U.S., to reduce the trade imbalance between the two countries, White House Press Secretary Sarah Sanders said in the statement.

China has agreed to start purchasing agricultural product from our farmers immediately, it said.

“Both parties agree that they will endeavor to have this transaction completed within the next 90 days. If at the end of this period of time, the parties are unable to reach an agreement, the 10% tariffs will be raised to 25%,” she said.

Xi has also agreed to designate Fentanyl as a “Controlled Substance,” meaning that those selling Fentanyl to the U.S. will be subject to China’s maximum penalty under the law, the statement said, calling it a “wonderful humanitarian gesture.”

Both agreed that “great progress” has been made on North Korea, and that both Trump and Xi would strive, along with North Korean Chairman Kim Jong Un, to “see a nuclear free Korean Peninsula.”

“President Trump expressed his friendship and respect for Chairman Kim,” it said.

Xi expressed openness to approving a previously unapproved Qualcomm-NXP deal, should it be presented to him again, it said.

“This was an amazing and productive meeting with unlimited possibilities for both the United States and China. It is my great honor to be working with President Xi,” Trump said.

The White House statements confirmed Chinese media reports that said no additional tariffs would be imposed after January 1, and that negotiations between the two sides would continue.

The dinner between Trump and Xi lasted nearly two-and-a-half hours — an hour longer than expected, according to the South China Morning Post.

At the end of the dinner, a big round of applause could be heard, and an unplanned family photo was taken, according to the paper.

In fact, it is going so well the two sides decide to take a “family photo” at the end – which is not something in the original plan.