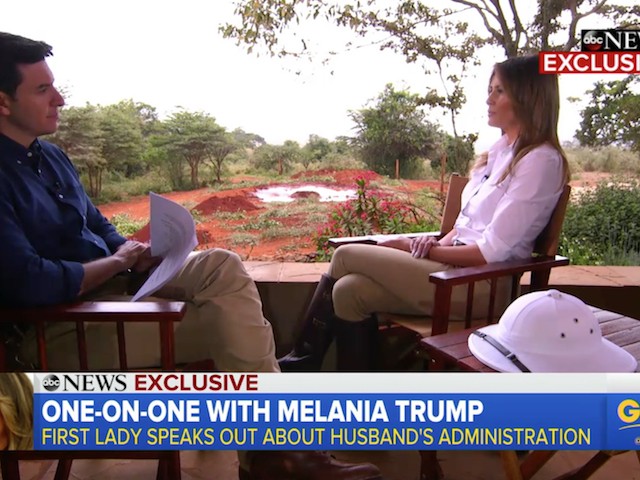 Thursday on ABC’s “The View,” after a heated discussion on the #MeToo movement the ladies moved on to First Lady Melania Trump wearing a pith helmet while in Africa.

Discussing Melania Trump’s “Good Morning America” interview in which the pith helmet was sitting on a table beside her, co-host Whoopi Goldberg said, “Can we talk about this gigantic white pith helmet up sitting in the shot, and it’s really not a good thing to see because it represents a lot of stuff for folks, especially folks in Africa.”

Meghan McCain said, “So I brought this up because there’s so many different elements to this. Number one, this is her first solo trip—she did a press spray, which is when you’re a politician standing in front of a group of reporters. She said, ‘Concentrate on what I say, not what I wear.’ But the problem is when you’re wearing things like this, which is very charged because it’s a symbol of British colonialism. My mother does a lot of philanthropy in Africa—she travels there all the time—never would be caught dead wearing this under these kind of circumstances and I think when I try and give Melania so much leg room and I really really really try with her, I just don’t understand her fashion choices. And our first lady’s fashion choices are political. It was political when Jackie O decided to wear a French designer instead of an American designer. The clothes that our first ladies wear are political choices. I just wish whoever is in change would maybe think a little more.”

Abby Huntsman said, “She needs a team around her to help her understand — ”

Sunny Hostin said, “She doesn’t have friends, that is what it is about. If she had someone like you on her team saying, ‘Girl, don’t wear that hat.’

McCain said, “I would have said don’t wear that hat.”

Huntsman said, “I actually think it’s different, it’s from the Trump playbook of we don’t care.”

Nicole Brown said, “I started with them not caring. I don’t care what she does. But I also think there’s no one on the team. They don’t bring people around who can say—hey this is not the right thing to do.”

McCain said, “My problem here is that her platform right now is #BeBest which is fine. Again I really I really don’t like sitting around, being nasty toward our first lady because I think this is important. I think when you’re wearing jackets that say ‘I really don’t care’ and you are wearing pith helmets in Africa but it sends a distinct message that I don’t think should be the message that we as Americans should send.”

Goldberg added, “You know what the real true problem here—this is when you don’t do any homework… when you think about some of the things that have been said about Africa, you know I would think that, I kind of thought well, maybe she’s going to see for herself, but clearly she didn’t do the research just to make sure this was on the right footing because basically a pith helmet says we own you.”