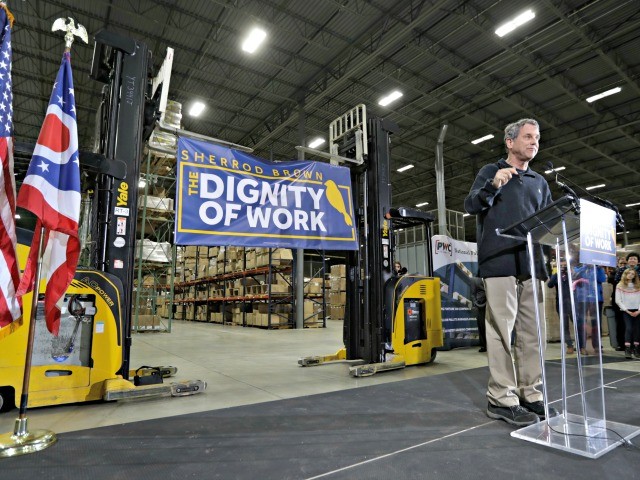 Sen. Sherrod Brown (D-OH) kicked off his “Dignity of Work” tour amid 2020 speculation in Brunswick, Ohio Wednesday night, which focused on worker rights and criticism of Donald Trump’s “phony populism.”

“[Trump] uses his phony populism to distract from the fact that he has used the White House to enrich billionaires like himself,” Brown told his 300 supporters in attendance. “Real populism is not racist. It’s never anti-Semitic.”

Brown, who is considering a run for president in 2020, added that real populists “don’t rip babies from their families at the border.”

The longtime Ohio senator also touched on worker rights, in which he said worker “wages are flat.”

“The dignity of work means hard work should pay off for everyone, no matter who you are or what kind of work you do,” Brown stated. “Corporate profits have soared. Executive compensation has exploded. Workers are producing more than ever before, but their wages are flat. Washington doesn’t even understand what collective bargaining is all about.”

After the tour launch in his home town, Brown will travel to Iowa to greet supporters and take part in several discussions. Brown will also visit Nevada, New Hampshire, and South Carolina before making an official announcement regarding a run for the highest office in the country.

As Sherrod Brown takes his phony pro-workers’ agenda to the early primary states, he risks abandoning his own Ohio constituents. Ohio didn’t sign up for a part-time Senator, and by partaking in the Democrats’ turbocharged race to the left, Brown is bound to leave Ohio voters in the dust. Brown’s ‘Dignity of Work’ tour has nothing to do with fighting for hard-working families, and everything to do with Brown’s own political ambitions.

In 2017, Brown – who is popular in Ohio, a key state won by Trump – voted against tax cuts that would help Ohio workers. He has also pocketed millions from lobbyists, special interests, and Wall Street, while claiming to fight against them.