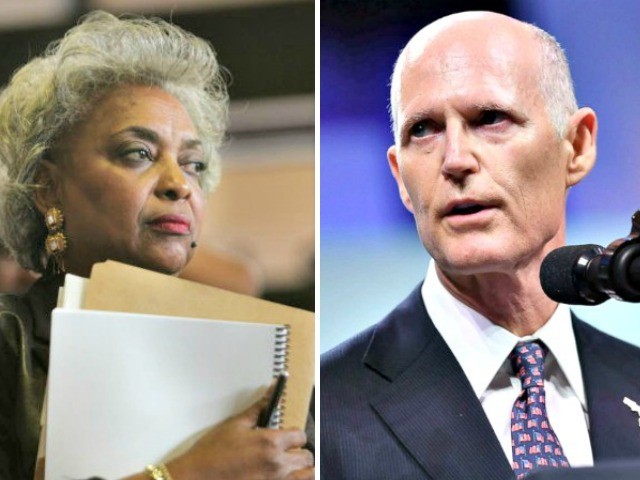 “After a series of inexcusable actions, it’s clear that there needs to be an immediate change in Broward County and taxpayers should no longer be burdened by paying a salary for a supervisor of elections who has already announced resignation,” Scott stated.

Scott further accused Broward election officials of “missed deadlines,” “lost ballots,” and “not being able to report basic information to the public.”

Scott appointed Peter Antonacci, president and CEO of Enterprise Florida, an economic development agency, to serve the rest of Snipes’ term until a November 2020 vote is held to choose Snipe’s replacement.

The Sun-Sentinel reported that it was unclear whether Scott’s decision will impact Snipes’ eligibility to collect nearly $130,000 per year from a state pension.

Scott’s own recount in his ultimately victorious Senate race was impacted by numerous missteps inside Snipes’ Broward County office, including a 2,040-vote discrepancy in the number of ballots cast in Broward during the Midterm Elections. Snipes claimed the purportedly missing ballots were in her office as her staff mounted an unsuccessful search.

Snipes’ office also reportedly mixed 20 rejected ballots with a sampling of 205 valid provisional ones in the most recent election. The discrepancy was reportedly found only after uproar from the Republican Party resulted in the Broward County canvassing board inspecting those provisional ballots.

Scott had called on Florida’s Department of Law Enforcement to investigate possible irregularities in ballot offices in southern Florida amid questions about the slow pace of Broward’s ballot counting and past wrongdoings by Snipes.

Snipes was also ordered by a judge earlier this year to change the way she handles mail-in ballots after her office was accused of opening them in secret.