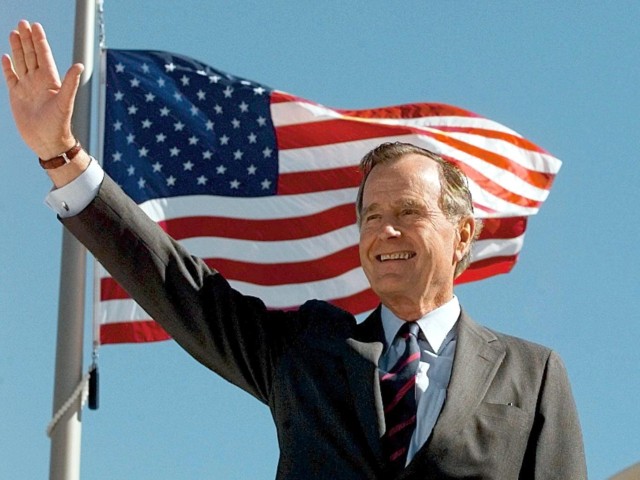 A Texas resident draped an American flag outside the Bush family home in Houston early Saturday morning in a display of support for the family after former President George H.W. Bush’s passing.

Matt Peveto paying his respects to George H W Bush by placing an American flag outside the Bush family home in Houston pic.twitter.com/bBvXx3Ky0Y

Matt Peveto, a resident of Houston, said he unfurled the flag over the front gate to the residence because he wanted to show respect for the late former president and his family while encouraging others to do so as well.

“I was watching the news and saw the American flag out here and said, ‘Well, we’re in Texas, so let’s make this a little bigger and better,’” Peveto told KTRK.

Peveto said that a close family friend of his worked for the Bush family and heard stories about Mr. and Mrs. Bush’s kindness and goodwill towards others.

Bush’s popularity soared after the U.S. success in the 1991 Gulf War, but a short, deep recession curtailed his approval ratings, and the Republican lost his bid for re-election to Democrat Bill Clinton.

“President Bush inspired generations of his fellow Americans to public service—to be, in his words, ‘a thousand points of light’ illuminating the greatness, hope, and opportunity of America to the world,” the president and first lady’s statement read.