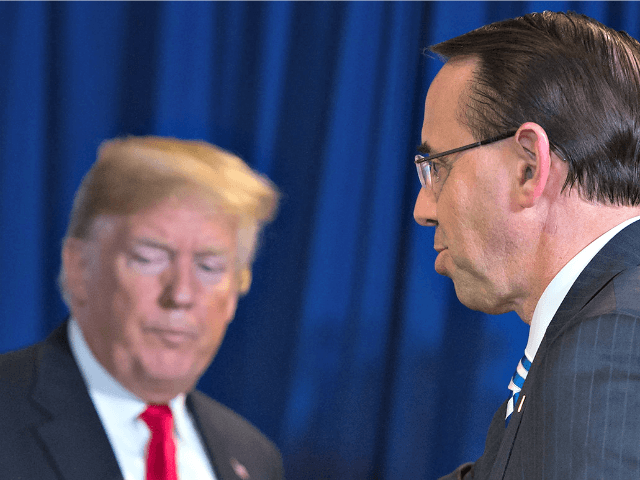 According to Costa, President Trump has affirmed to “several” associates in the past 36-hours that he will not terminate Rosenstein, citing suspicions of former FBI Deputy Director Andrew McCabe’s involvement in the matter.

POTUS has told several people on Fri. and Sat. that he’s not going to fire the deputy AG and is suspicious of anything that even tangentially involves McCabe, according to three advisers familiar with the ongoing discussions…

The New York Times on Friday reported Rosenstein and multiple FBI officials met one week after FBI Director James Comey was fired, in which he is said to have suggested secretly recording President Trump at the White House “to expose the chaos consuming the administration.” During the tense gathering, Rosenstein elected to wear a wire, and to the surprise of those present, was reportedly asked if the offer was sincere. The top Justice Department official assured them the task was feasible, because White House security made a habit of not checking his cell phone when entering the premises.

Further, the Deep Stater had allegedly floated the idea of using the recording to lobby then-Homeland Security Secretary John Kelly and Attorney General Jeff Sessions to invoke the 25th Amendment.

It was Comey’s ouster that reportedly drove Rosenstein to ponder about the president’s mental fitness and, in a May 12 meeting with McCabe and various FBI officials, the Justice Department official expressed disgruntlement with the White House publically citing the memo he was tasked to write, justifying the firing, because of the perceived damage it caused to his reputation.

The May 12 meeting, among other interactions Rosenstein had with others at FBI, were detailed in a series of memos written by McCabe and fellow bureau officials. McCabe’s attorney, Michael R. Bromwich, told the Times that the former FBI Deputy Director “has no knowledge of how any member of the media obtained those memos,” adding, “A set of those memos remained at the F.B.I. at the time of his departure in late January 2018.”

In a statement to the Times, Rosenstein vehemently denied the report, describing it as “inaccurate and factually incorrect.”

“I will not further comment on a story based on anonymous sources who are obviously biased against the department and are advancing their own personal agenda,” said Rosenstein. “But let me be clear about this: Based on my personal dealings with the president, there is no basis to invoke the 25th Amendment.”

A Justice Department spokesperson issued a separate statement to the paper, admitting that while Rosenstein did raise the prospect of wearing a wire, it was said “sarcastically.”