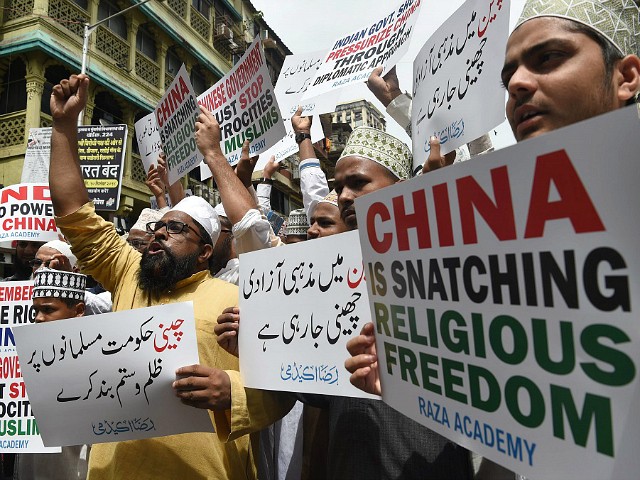 The BBC unveiled compelling evidence this week confirming that China is building a massive network of internment camps to imprison members of its Muslim Uighur minority accused of terrorism without trial.

In a detailed report, BBC suggested that Beijing has likely constructed at least 44 camps, also known as re-education centers, in China’s Muslim Uighur (or Uyghur)-majority Xinjiang, the largest province in the country.

Of 101 facilities across Xinjiang analyzed by experts, the analysts determined that there is a likelihood that 44 are security facilities, BBC pointed out.

The experts “cannot say what the sites are being used for. But it is clear that over the past few years China has been building a lot of new security facilities, at remarkable and increasing speed,” noted the British news outlet. “It is likely to be an underestimate of the true picture.”

“There is a striking conclusion – the recent trend is towards larger facilities,” it added.

The Agence France-Presse (AFP) news agency has determined that there are up to 181 re-education centers in Xinjiang.

Earlier this year, one of the local government departments in charge of such facilities in Xinjiang’s Hotan prefecture made several purchases that had little to do with education: 2,768 police batons, 550 electric cattle prods, 1,367 pairs of handcuffs, and 2,792 cans of pepper spray. The shopping list was among over a thousand procurement requests made by local governments in the Xinjiang region since early 2017 related to the construction and management of a sprawling system of “vocational education and training centers.”

China denies that it is detaining members of its Uighur minority, claiming they are willingly attending what it describes as “vocational schools” aimed at combating “terrorism and religious extremism.”

However, BBC spoke to individuals who have been directly affected by the extrajudicial detentions in Xinjiang.

“My mum has been detained for no reason,” Reyila Abulaiti, a native of Xinjiang province who now lives in the U.K., told BBC, referring to Beijing allegedly forcing her mother into one of the camps. “As far as I know, the Chinese government wants to delete Uighur identity from the world.”

Thousands of guards equipped with tear gas, Tasers, stun guns and spiked clubs keep tight control over “students” in facilities ringed with razor wire and infrared cameras, according to the documents. The centers should “teach like a school, be managed like the military, and be defended like a prison”, said one document, quoting Xinjiang’s party secretary Chen Quanguo.

The U.S. has acknowledged the existence of the camps, also known as re-education centers, in the Muslim-majority province of Xinjiang, noting that China has already forced hundreds of thousands of Uighurs accused of separatist and terrorist activities into the facilities to ensure they practice their religion within the confines of the inherently atheist ideology of the Chinese Communist Party.

At the centers, China reportedly forces people to listen to propaganda at the facilities to ensure the worshippers remain loyal to the Communist Party.

Harsh new legal penalties have been introduced to curtail Islamic identity and practice – banning, among other things, long beards and headscarves, the religious instruction of children, and even Islamic-sounding names.

The policies appear to mark a fundamental shift in official thinking – separatism is no longer framed as a problem of a few isolated individuals, but as a problem inherent within Uighur culture and Islam in general.

It coincides with a tightening grip on society under President Xi Jinping, in which loyalties to family and faith must be subordinate to the only one that matters – loyalty to the Communist Party.

BBC revealed that the re-education centers are part of a massive network of camps.

“There are tens of thousands of people there now. They have some problems with their thoughts,” a Xinjiang resident told BBC, referring to just one of the internment camps.