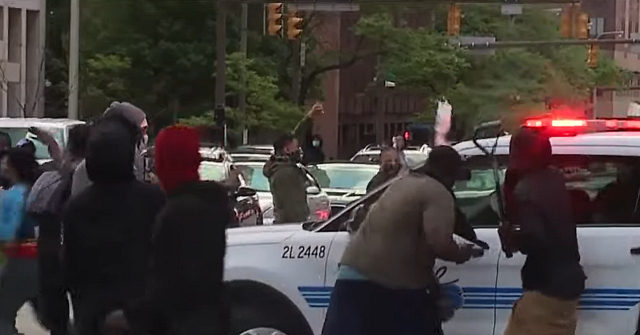 All 99 people arrested at the Cleveland riot Saturday in the aftermath of a demonstration protesting the death of George Floyd were from Ohio, according to records released by the Cleveland Police Department on Tuesday.

But an investigative report by the local Fox TV affiliate shows that a number of the addresses given to officials were bogus.

The arrest records appear to conflict with a statement made by the Cleveland police chief on Sunday, as Cleveland.com reported:

Cleveland Police Chief Calvin Williams said during a 12:45 a.m. Sunday briefing on Facebook Live that police believe outsiders came into the city with the purpose of rioting.

“We know that a lot of the things that happened today were not [done] by people who reside in Cleveland or live in the area,” Williams said during the 8-minute briefing. “We’re going to do everything we can to bring people to justice who took part in the destruction in downtown today.”

“There were people who participated [in the protest] who were intent on not keeping things peaceful and were not from Cleveland,” Chief Williams added at Sunday’s briefing.

On Tuesday, Cleveland.com reported on the details of the 99 arrested on Saturday:

Cuyahoga County Jail records, however, show no arrests of anyone from outside the state of from over the weekend.

Most of those charged were from Cleveland. Dozens of others are from suburbs like Solon, Parma Heights, Maple Heights and Warrensville Heights.

But late Tuesday Fox8 reported some of those arrested in Cleveland on Saturday apparently listed fake addresses:

The FOX 8 I-Team uncovered new questions about the true identities of people arrested for rioting and breaking curfew in downtown Cleveland. We found the addresses some gave are bogus. . .

On the west side, we met Keith Sowden, a landlord. He said he’d never heard of a man arrested for throwing rocks and bottles at police, and now using an address for Sowden’s property. He was taken aback to find somebody using his address after taking part in the rioting.

A ticket for a curfew violation shows a street in Cleveland called “Vancroft,” although it doesn’t exist. Another person gave an address on East 101st Street. We searched and then a police dispatcher told us that residence does not exist either.

The fake addresses of some arrested in Cleveland on Saturday raised speculation that the riots may have been organized in advance, at least in part, by unknown parties, who either escaped arrest or gave inaccurate identification to police when arrested.

Visual evidence of the attire of some rioters, in Cleveland and elsewhere, suggested that some of the rioters may have been members of the left wing group known as Antifa, whose members are known to dress in black and wear a variety of masks and face coverings. President Trump recently tweeted he intends to declare Antifa a domestic terrorist organization

On Sunday, Attorney General William Barr specifically mentioned Antifa in this statement on the recent riots around the country:

It is the responsibility of state and local leaders to ensure that adequate law enforcement resources, including the National Guard where necessary, are deployed on the streets to reestablish law and order. We saw this finally happen in Minneapolis last night, and it worked.

Federal law enforcement actions will be directed at apprehending and charging the violent radical agitators who have hijacked peaceful protest and are engaged in violations of federal law.

To identify criminal organizers and instigators, and to coordinate federal resources with our state and local partners, federal law enforcement is using our existing network of 56 regional FBI Joint Terrorism Task Forces (JTTF).

The violence instigated and carried out by Antifa and other similar groups in connection with the rioting is domestic terrorism and will be treated accordingly.”

While fake addresses among the 99 arrested in Cleveland on Saturday is clear evidence of identity concealment on the part of some involved in the rioting there, at present there is no direct evidence that members of Antifa were involved in organizing those riots.