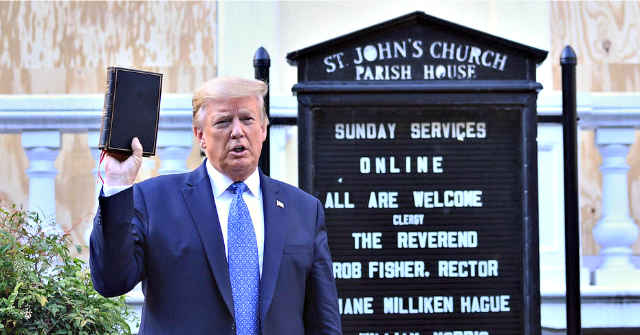 Orr made her remarks in response to a tweet from Trump campaign Coalitions Director Hannah Castillo, who praised Trump for boldly walking through Lafayette Square to visit St. John’s Church, which was set on fire the night prior. The president stoically held up a Bible upon arrival — an action that drew both outrage and criticism from progressives, celebrities, and media personalities.

“Then why didn’t he pray?” Orr said, issuing a series of questions and accusing the president of using the Bible as a “prop” during his symbolic action.

“Why didn’t he offer words of comfort as he stood in front of a church? Why didn’t he open the Bible he brought as a prop and read aloud from it?”  Romans 12:14-21 would have been comforting to hear. Even a verse from ‘Two Corinthians’ would have sufficed,” she added:

Romans 12:14-21 would have been comforting to hear. Even a verse from “Two Corinthians” would have sufficed https://t.co/7pH4qji9WR

She tried to defend her original tweet after a slew of backlash, adding, “If he prayed and I was standing there in my capacity as a reporter, I would have bowed my head and prayed with him”:

If he prayed and I was standing there in my capacity as a reporter, I would have bowed my head and prayed with him.

“Who the hell do you think you are? You’re a garbage reporter at a garbage publication. You don’t regulate anyone’s relationship with God,” he said. “How disgusting and offensive”:

Who the hell do you think you are? You’re a garbage reporter at a garbage publication. You don’t regulate anyone’s relationship with God. How disgusting and offensive. https://t.co/eeB4l5AL2V

Trump supporters across social media have praised the president after he walked to St. John’s Church following Monday’s Rose Garden address. Progressives quickly raged over his visit, accusing him of “tear-gassing” protesters for a photo op — a claim the U.S. Park Police — and even House Speaker Nancy Pelosi (D-CA) — cast doubt on.

No tear gas was used by USPP officers or other assisting law enforcement partners to close the area at Lafayette Park,” a USPP statement released Tuesday read, detailing that action was only taken after protesters “began throwing projectiles including bricks, frozen water bottles and caustic liquids” and “climbed onto a historic building at the north end of Lafayette Park that was destroyed by arson days prior.

“Intelligence had revealed calls for violence against the police, and officers found caches of glass bottles, baseball bats and metal poles hidden along the street,” the federal law enforcement agency added.

“Maybe they didn’t have tear gas, I don’t know,” Pelosi said during a Wednesday morning appearance on MSNBC’s Morning Joe, just days after declaring that Trump had authorities “tear-gassing peaceful protestors without provocation.”

Pelosi on Tuesday decided to read a partial verse from Book of Ecclesiastes in response to President Trump’s actions.

“Last night when I saw the president holding up the Bible, I was thinking of so many things in the Bible that would have been appropriate in terms of the humanity of all people in our country,” Pelosi said.

“The time for every event under heaven. He talks about a time to heal — talks about embrace and time to shun embracing, how about that. … A time for peace. Let’s focus on the time to heal,” she added.

Fear God and keep His commandments,
For this is man’s all.
For God will bring every work into judgment,
Including every secret thing,
Whether good or evil.

“The president held up the Bible the other day in Washington, DC. Here in New York we actually read the Bible, and there are some passages that I think are especially appropriate today,” Cuomo said, reading a range of scriptures.