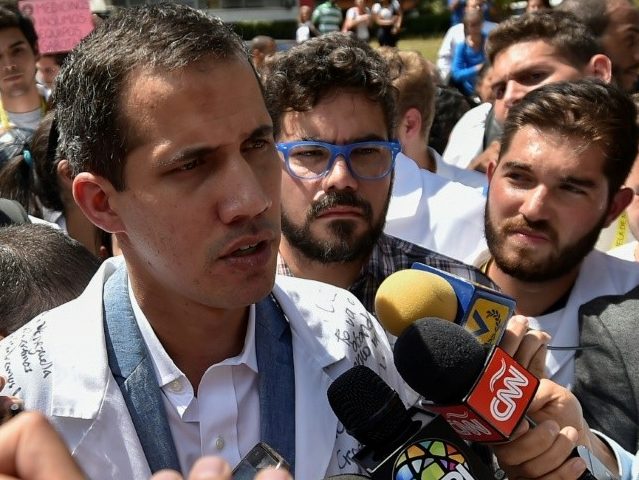 President Juan Guaidó of Venezuela published an opinion column in the New York Times Wednesday – a newspaper that has taken hundreds of thousands of dollars from the socialist Maduro regime Guaidó is replacing – introducing himself to the American people and pleading for a return to “normality” in his country.

Guaidó writes in the piece that his coalition is in dialogue with members of the Venezuelan military and has offered them amnesty if they defect, as the armed forces are the only institutions left aligned with Maduro.

Venezuela is currently suffering the worst humanitarian and political crisis of its history, the product of over two decades of socialist authoritarianism led by Maduro and predecessor Hugo Chávez. Venezuelans face beatings, arbitrary detentions, torture, imprisonment, and death for publicly disagreeing with the regime. In the past week, since Guaidó took office, the United Nations estimates that Maduro’s military has killed at least 40 peaceful protesters and imprisoned nearly 1,000 people, including children as young as 12.

“It is incumbent on us to reinstate normality, in order to build the advanced and prosperous country of which we all dream,” Guaidó wrote in his column, urging the international community to support his efforts. He explains that, contrary to Maduro’s interpretation of events, his swearing in as interim president of the country was not a coup or in any way in opposition to the laws of Venezuela.

“My ascension as interim president is based on Article 233 of the Venezuelan Constitution, according to which, if at the outset of a new term there is no elected head of state, power is vested in the president of the National Assembly until free and transparent elections take place,” he wrote. “This why the oath I took on Jan. 23 cannot be considered a ‘self-proclamation.’ It was not of my own accord that I assumed the function of president that day, but in adherence to the Constitution.”

In contrast, Guaidó notes that Maduro proclaimed himself president after a fraudulent election in May that over 80 percent of Venezuelans refused to participate in.

“His original six-year term was set to end on Jan. 10. By continuing to stay in office, Nicolás Maduro is usurping the presidency,” Guaidó notes.

The interim president also takes the time to introduce himself and his history, having taken a relatively obscure role in the leadership of the opposition coalition for years before abruptly being elected president of the National Assembly this year. Despite not being familiar to the cameras, Guaidó was a founding member of Popular Will, the socialist party he represents, and has been a student protest leader against Chávez since his college days in the mid-2000s.

Maduro’s main tactic against the pro-democracy opposition, he argues, is “to repress and persecute. I know this because buckshot pellets fired by members of the armed forces — at peaceful protesters in 2017 — remain lodged in my own body.”

When protests continue, as is the case today, Maduro demands a dialogue mediated by sympathizers; in the past, this role has fallen to former Spanish president José Luis Rodríguez Zapatero. “But we have become immune to such manipulation,” Guaidó asserts. “There are no more stunts left for them to pull. The usurpation of power was their only remaining option.”

Guaidó concluded in the piece that his coalition needs to unite not only Venezuelans but the entire free world to rebuild what Maduro and Chávez destroyed. His goal to “reinstate normality” requires, he wrote, “the support of the international community, especially the Lima Group, the Organization of American States, the United States and the European Union,” as well as the Venezuelan people.

Guaidó joins the leader of his political party, prisoner of conscience Leopoldo López, and Maduro himself as a New York Times columnist. In 2015 and 2017, the newspaper published advertising paid for by Maduro’s government excusing the regime for violence against dissidents and the violent expulsion of Colombian nationals from the border in retaliation of that nation’s government promoting freedom in Venezuela. The 2017 ad, in which the regime accused President Donald Trump of seeking to “manufacture a political crisis” by rejecting Maduro’s repression of dissidents, reportedly netted the Times $200,000.

The Times has, as mentioned above, also published members of the opposition, particularly López, who also granted the newspaper an interview in 2018 that violated the Maduro regime’s rules for his house arrest. In it, López continued to condemn the regime and call for free and fair elections, outraging Maduro.

Guaidó’s Times column followed a video published by Maduro addressed to the American people in which he claimed that the opposition in his country was orchestrated and controlled by the U.S. government.

The dictator alleged that American media were “doctoring” images of state violence against peaceful dissidents in Venezuela and that President Donald Trump was planning a “new Vietnam” in Venezuela and “extremists” like National Security Advisor John Bolton were actively encouraging an invasion.

While accusing Washington of planning a military attack, Maduro has spent hours this week recording propaganda footage with Venezuelan troops, attempting to keep up with them while they jog and learn how to use sophisticated military equipment.