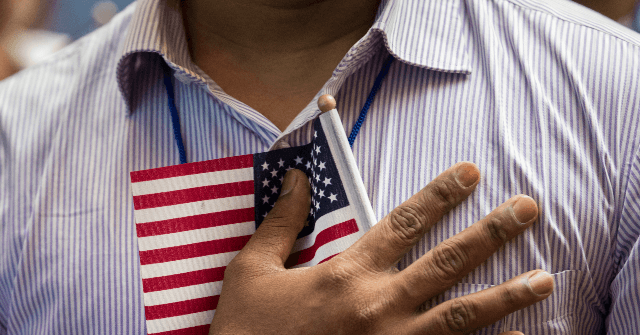 Republicans are nearly three times more likely than Democrats to say they are “extremely proud” of America, according to a Gallup poll released Monday.

“The latest Gallup survey found that 67% of Republicans are ‘extremely proud’ of their country compared to just 24% of Democrats,” the Washington Examiner reported.

However, the survey noted that American pride had dropped among Republicans from 76 percent one year ago to 67 percent in 2020.

“It is unclear why the number declined, though Gallup noted that it’s [sic] survey took place recently and after the death in police custody of George Floyd and the continued coronavirus crisis,” according to the Examiner.

The Gallup poll also noted that overall American pride was at the lowest ever recorded.

“Although a majority of adults in the U.S. still say they are ‘extremely proud’ (42%) or ‘very proud’ (21%) to be American, both readings are the lowest they have been since Gallup’s initial measurement in 2001,” the article said.

“On handling the overall economy, Trump bests Biden by 48 percent to 37 percent,” according to Breitbart News.

Despite recent unrest across the country, the unemployment rate fell to 13.3 percent in May from a record high of 14.7 percent in April.

“Payrolls also unexpectedly rose by 2.5 million workers: ‘Economists estimated the unemployment rate would rise to nearly 20 percent in May and that the economy would shed an additional 8 million jobs,’” Breitbart News reported.

At the White House on June 5, President Trump celebrated the positive news and said, “This is better than a ‘V,’ this is a rocket ship.”