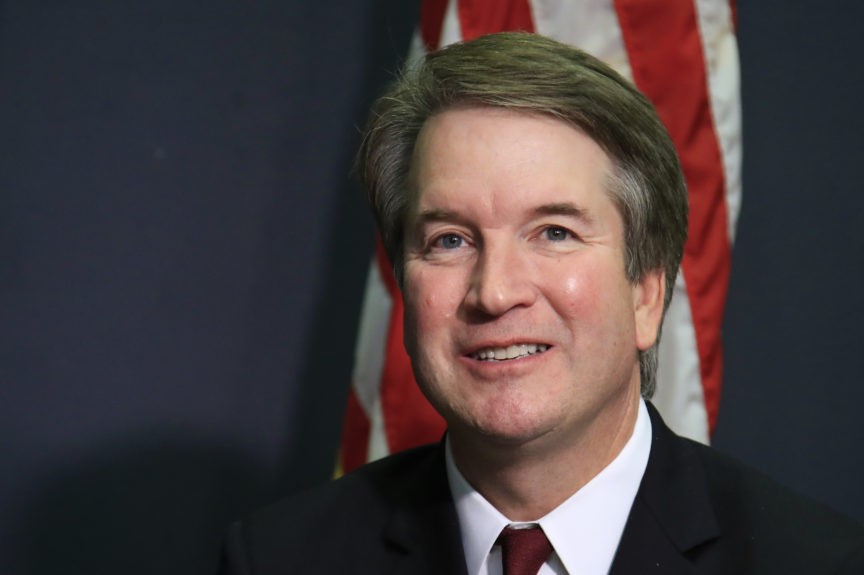 Sen. Steve Daines (R-MT) spoke with Judge Brett Kavanaugh on Thursday evening to assure the judge that he will there in the U.S. Senate on Saturday if his vote is needed to confirm Kavanaugh as the next Associate Justice of the United States Supreme Court, Breitbart News has learned.

Daines’ daughter’s wedding is on Saturday, and he intends to walk her down the aisle at her wedding. But if needed, as Breitbart News has learned per a source close with Sen. Daines, the senator has assured Kavanaugh that there is a plane standing by to transport him to the U.S. Senate to confirm Kavanaugh on Saturday night.

GOP MT Sen Daines tells Kavanaugh “he has made arrangements to be there to get him across the finish line as needed.” Daines initially said he may miss the Sat confirmation vote. Daines’s vote is essential to get the math to work. Daines’s daughter is getting married in MT Sat pic.twitter.com/5naEq36edR

Daines also spoke with President Donald Trump’s eldest son, Donald Trump, Jr., and made the same assurances–that if his vote is needed for final confirmation, a plane is standing by and he will be there.

On Thursday evening, as Senate Majority Leader Mitch McConnell set the schedule in the U.S. Senate on Friday morning for a contentious cloture vote to clear the deck for a final confirmation vote on Saturday, it was reported that Daines would not be in the Senate on Saturday due to his daughter’s wedding.

#BREAKING @SteveDaines has a scheduling conflict this weekend. He says he’ll be walking his daughter down the aisle at her Montana wedding, regardless of the #KavanaughVote that could take place this weekend. #NBCMontana #mtpol #mtnews #Kavanaugh

The news of Daines not being there on Saturday came less than an hour before McConnell announced the cloture vote on Friday:

The Senate will be in session at 9:30 tomorrow morning. Under the regular order, the vote to advance the nomination of Judge Brett Kavanaugh to serve on the U.S. Supreme Court will be at 10:30.

Almost immediately, leftists and media figures rejoiced–thinking it would delay the confirmation vote again or, worse for Kavanaugh, spell doom for his chances at confirmation:

Congratulations to Steve Daines’ daughter, but also Republicans can’t confirm Kavanaugh (as they plan to do this weekend) without him. https://t.co/RX0RSnkMwk

A Supreme Court nomination vote being pushed back because it conflicts with Steve Daines’ daughter’s wedding would be such a perfectly American ending to this saga. https://t.co/A1sBPsDcJ4

GOP senator Steve Daines can’t give his daughter’s reproductive rights away on Saturday because he’ll be giving her away to her husband in Montana.

But, as Breitbart News can report here, the senator spoke with Kavanaugh and has arrangements lined up to make it back in time if necessary on Saturday night–something that may set up a contentious Saturday evening where the vote may be held open for some time. And Daines spoke with Trump, Jr., too, who confirmed the news on Twitter:

.@SteveDaines is a good friend and hunting/fishing buddy and as far as his vote this weekend is concerned he tells me he has it covered.

Coming from this man you can take that to the bank!

“Anyone who knows Sen. Daines knows that he is a conservative champion who has fought tooth and nail for all of President Trump’s judicial nominees,” Andy Surabian, a senior adviser to Trump, Jr., and former Trump campaign and former White House official, told Breitbart News. “He helped lead the fight to confirm Justice Gorsuch and never for a moment wavered on Kavanugh. So it comes as no surprise to me that if his vote is needed this weekend, he will find a way to be in Washington, DC.”

Daines’ vote may not be needed in the end. Currently, there are 51 Republicans and 49 Democrats in the U.S. Senate. Kavanaugh only needs a bare minimum of 50 votes to be confirmed, meaning if all other Republicans vote for him while all Democrats vote against him and Daines is absent, he would be confirmed, 50-49. If one Republican breaks against Kavanaugh, and all Democrats oppose Kavanaugh’s confirmation, Daines’ vote would be needed, and then Vice President Mike Pence would be standing by to cut a 50-50 tie in the Senate.

Sasse is, according to his office, leaning yes, and Flake has shown positive signs, as has Collins–while Murkowski has been quieter. Manchin, meanwhile, faces a tough re-election in West Virginia, where his GOP opponent Attorney General Patrick Morrisey has been hammering him on Kavanaugh, putting enormous pressure on the Democrat to back the highly qualified judge for the Supreme Court. It remains to be seen how each will vote.

Now that a potential disaster–wherein an absence by Daines would mean Republicans could afford to lose none of the undecided Republicans if Manchin does vote no–has been averted by the Montana Republican’s assurances that he has travel arrangements lined up in case of emergency, it means Kavanaugh is on a clearer path to eventual likely confirmation.

It would, in the end, however, mean more drama in the U.S. Senate, as the vote would remain open late into evening Saturday until potentially  early Sunday.