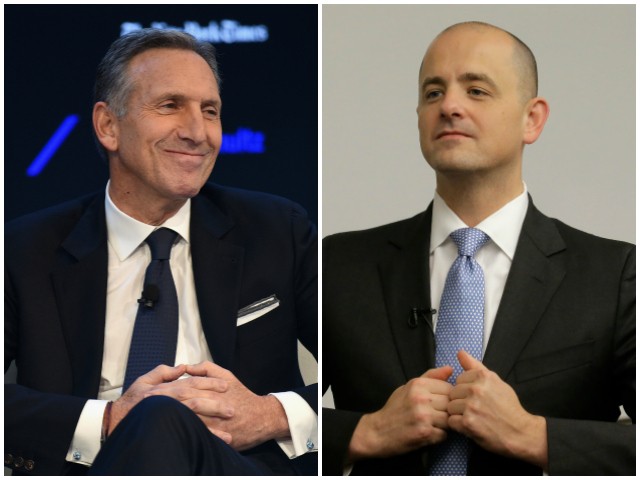 Today, just about every Democrat is denouncing Howard Schultz, the Starbucks billionaire, who is publicly contemplating an independent run for the White House.  The fear of course, is that Schultz could draw votes away from the Democrats’ 2020 nominee and thereby help re-elect Donald Trump.

Today, that’s the Dems’ doomsday scenario.  And yet as we shall see, with a little tweaking, the Schultz campaign could well end up being an asset to the Democrats.

In the meantime, of course, Schultz is being pounded, blasted, clobbered—you name it.

For instance, New York Times columnist Michelle Goldberg ripped into Schultz’s possible candidacy as “reckless idiocy” and “megalomania.”  And at a New York City appearance, an unknown heckler shouted at Schultz, “Don’t help elect Trump, you egotistical billionaire asshole!”  The tweet of that moment, at last count, has been retweeted more than 13,000 times and liked more than 56,000 times.

For his part, Schultz says he is running because he has things to say—things not in keeping with today’s leftward Democratic Party.  His focus on reducing the national debt, for example, is way out of kilter with current progressive thinking.  And so while he has always been regarded as a Democrat, he now says he can no longer defend the party’s new beliefs:

In other words, Schultz has a critique of the current Democrats, and he is willing to self-fund a platform from which to express himself; indeed, he is, literally, willing to put his money where his mouth is.

Yet Democrats are having none of it.  And Hollywood types, too, have hurled their anti-Schulz anathemas, including Bill Maher, Rob Reiner, and Ken Olin. And for her part, Cher not only trashed Schultz, but went further, declaring herself eager to boycott his company, Starbucks.

In fact, boycotting Starbucks seems to be a big part of the stop-Schultz plan. Neera Tanden, president of the Center for American Progress, the leading Democratic think tank in Washington, D.C., took time away from the life of the mind to tweet that she, too, was “done with Starbucks.”  Indeed, in the cutting assessment of Axios’ Dan Primack, “Starbucks is the new Bain Capital.”

Yes, Democratic activists are seeking out every possible pressure point against Schultz.   In that vein, Democrats are targeting Schultz staffers, too, including Bill Burton, a former deputy press secretary in the Obama White House. Dem diggers have already uncovered a 2016 op-ed for The Sacramento Bee, in which Burton warned against third-party candidates—most obviously, Jill Stein, the ’16 Green Party nominee—who might siphon away Hillary Clinton votes and elect the dreaded Trump.  And so now, Democrats, the same logic should apply to Schultz.

Behind the scenes, no doubt, far more pressure is being applied to Burton and anyone else—including ex-Republican Never Trumper Steve Schmidt—associated with Schultz.  The message: If you stick with Schultz, you’ll never eat lunch in this town—this town, or any town.

Interestingly, about the only “supporter” of Schultz’s run seems to be Donald Trump. With complete strategic irony, he tweeted:

Howard Schultz doesn’t have the “guts” to run for President! Watched him on @60Minutes last night and I agree with him that he is not the “smartest person.” Besides, America already has that! I only hope that Starbucks is still paying me their rent in Trump Tower!

David Axelrod, Barack Obama’s onetime campaign guru, immediately tweeted some explanation to his fellow Democrats.  Trump was, Axelrod said: “Trying to goad Schultz in. @realDonaldTrump knows that his 40-45 percent isn’t good enough.  He needs Schultz to run as Indy and lower the threshold.”

Trying to goad Schultz in. @realDonaldTrump knows that his 40-45 percent isn’t good enough. He needs Schultz to run as Indy and lower the threshold. https://t.co/lxRzpl1VW1

It’s worth remembering that Bill Clinton won the White House in 1992 with just 43 percent of the vote, because Ross Perot took 19 percent—and most of Perot’s vote came out of George H.W. Bush’s hide.  Other candidates, too, have won the White House with even lower popular-vote percentages, thanks to multi-candidate fields; back in 1860, Abraham Lincoln won with less than 40 percent.  So right now, Trump might be thinking, yeah, the more the merrier.

Having been hit so hard in the days since he teased his candidacy on 60 Minutes, Schultz already seems to be reassessing.  Bill Burton, the Obama-turned-Schultz flack, told Bloomberg News on Tuesday that Schultz would not decide until “summer or fall.”

Then Burton went further about Schultz’s thinking: “He 100 percent will only run if he sees a viable path. There’s no chance he gets in this race if there isn’t a path.”  If we can translate this Beltway-speak, it seems that Team Schultz is signaling that their man will not run if he’s destined to be just a spoiler.   So relax, Democrats, and ease up!

And yet as we have seen, Schultz does have things to get off his chest; having made coffee all his life, he now wants to make policy.  As Burton put it, Schultz plans to travel the country and pitch himself as a moderate alternative to Trump and left-wing Democrats: “The far left and the far right are controlling the conversation when people actually mostly agree in the middle.”  So maybe Schultz wants to keep having that conversation—he seems like the chatty type.

Of course, his centrist sentiments will hardly endear Schultz to lefty Democrats.  And yet if he is just talking, as opposed to actually running—and threatening the Democratic nominee’s ‘20 victory chances—most Dems won’t much care.

Indeed, there’s a way for Schultz to have his cake and eat it, too.  How so?  He can run for president only in certain states—that is, in states where he can’t affect the outcome, at least to the detriment of the Democrats.   That way, he can talk about the issues near and dear to him, without getting in the way of what’s near and dear to most Democrats, namely, winning.

We might consider: As an independent candidate, without the benefit of an existing party line, Schultz has no automatic ballot access; he will have to go through the difficult process of getting on the ballot in each state, one by one.  His money will help, of course, but it’s still a complex process.

So what if Schultz, guided by helpful Democratic politicos—you know, such as, maybe, Bill Burton—decides to pick and choose his states, choosing to get on the ballot only in states where his presence would hurt Trump?

Trump supporters needn’t worry that I’m divulging some secret; there’s plenty of precedent for this sort of selective targeting.  It even has a name, “tactical voting,” boasting its own extensive Wikipedia page.

Indeed, tactical voting has already been attempted against Trump.  In 2016, the Never Trump independent ticket of Evan McMullin and Mindy Finn came into existence for one reason, and one reason only: Beat Trump.

The McMullin-Finn ticket managed to get itself on the ballot in 10 states, most of them Republican-leaning states.  And almost the entire focus of the McMullin-Finn ticket was on just one state, Utah, where McMullin is from.  It was hoped that as a native, he might draw enough votes from his fellow Mormons to deprive Trump of the Beehive State’s six electoral votes—and give them to Hillary Clinton.

Indeed, if the 2016 election had been closer, those six electoral votes could have made the difference.  As it happened, McMullin got 21 percent of the vote in Utah, while Trump won the state with 45 percent and went on to win the electoral college by a comfortable margin.  Not every plan works, but we can see the model: Use independent candidates to nibble away at Trump’s vote.

So in 2020, if Schultz follows a McMullin-ish approach, he’ll buy his way onto the ballot in red states, and not blue states—and of course, he’ll also stay the heck away from purple states.  If so, then the Democrats who have been trashing Schultz will start cheering him.  Indeed, all the tweeters and hecklers will gain the proverbial strange new respect for Schultz as he “speaks truth to power.”

So sure, right now, things look rough, even catastrophic, for Schultz, and maybe even for his company.  And yet if he chooses to spend his money in 2020 on campaign ads in, say, Utah, well, the Democrats will be pleased.  Why, in gratitude, they might even buy more $4 lattes.  If so, then the Starbucks tycoon would see his $3.1 billion fortune get a nice bump up.