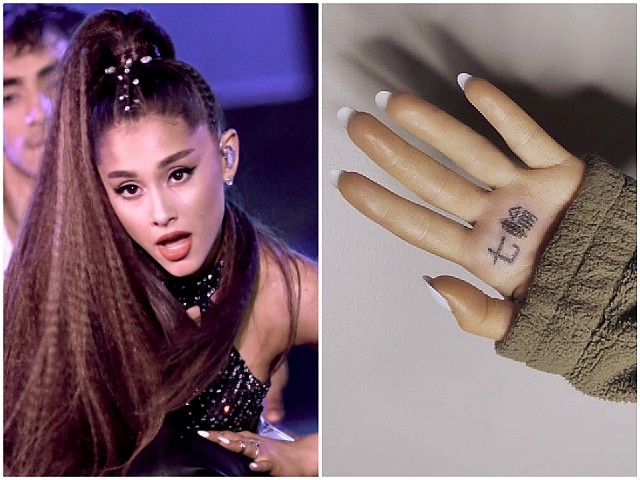 Pop star Ariana Grande deleted a post of her new Japanese tattoo from Instagram this week after fans pointed out that it translates to”small charcoal grill,” not “7 Rings” as she intended.

Ariana Grande had gotten the tattoo on her palm thinking it meant “7 Rings,” which is the title of her latest single.

The text, however, translates to “small charcoal grill.”

According to Kotaku, “The kanji character 七 means ‘seven,’ while 輪 means ‘hoop,’ ‘circle,’ ‘ring,’ or ‘wheel.’ However, when you put them together, the meaning is different! 七輪 (shichirin) is a ‘small charcoal grill’ and not ‘seven rings,’ which is written differently in Japanese.”

Searches on Google for “七輪” mostly return images of meat being barbecued on small grills.

Grande was mocked on social media for the tattoo mistake, prompting the pop star to delete her Instagram post.

Ariana Grande got 七輪 tattooed on her palm.

She thought it meant “seven rings”, but it means camping grill.

Can’t believe I did this….. I got a tattoo to match @ArianaGrande 😂 pic.twitter.com/lGtV3xJHIb

In a since-deleted Twitter explanation, Grande reportedly posted, “indeed, i left out ‘つの指’ which should have gone in between. it hurt like fuck n still looks tight. i wouldn’t have lasted one more symbol lmao. but this spot also peels a ton and won’t last so if i miss it enough, i’ll suffer thru the whole thing next time.”

In her recent “Thank U, Next” music video, Grande mocked at President Trump, and following Trump’s 2016 election win, Grande posted on Twitter, “I am in tears.”

Late last year, Grande revealed that she missed former President Barack Obama, and according to Fox News, the pop star has “aligned herself with the March for Our Lives as well as Black Lives Matter.”

Over three years ago, Grande faced controversy after being filmed licking a donut she hadn’t purchased in a store and saying, “I hate Americans. I hate America.”