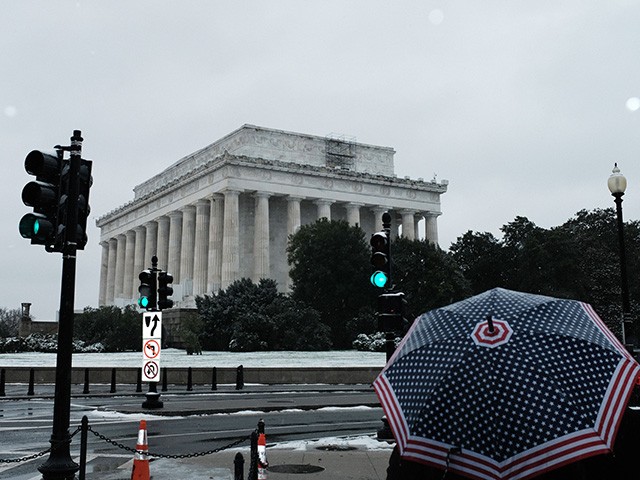 In what is being described as a “messy mix” of snow, sleet, and freezing rain, winter appears to have come early to Washington, D.C., causing commute delays and school cancelations across the nation’s capital.

A Winter Weather Advisory is in effect and will be in place until at least Thursday evening as one to two inches are expected to fall today. The November snowfall average is 0.5 inches. The November snowfall record in the city is 11.5 inches, while averaging  14.5 inches of snow annually. The snowy weather will then head north and west of the city, according to WTOP. According to reports, Thursday’s weather is the first measurable snowfall in November since 1996.

“A lot of people didn’t think the snow would materialize this early in the year. It’s a little bit of a shock value,” Virginia Department of Transportation official Ellen Kamilakis said. “We ask people to slow down, to add in more time to their commutes, to not underestimate things. Don’t drive like it’s a fall day; drive like this is a winter day.”

This morning Washington, D.C. is getting its first measurable snowfall in November in 22 yrs. #WinterStormAvery is producing snow from around St. Louis to the Eastern U.S. Our crews are LIVE in the field & studio with the latest on conditions & timing of the snow, ice & rain. pic.twitter.com/kYlbCq2SW6

The snowfall is part of a larger storm picking up strength in on the east, where the interior mid-Atlantic will reportedly be hit with the most ice and snow. “There is the potential for 6-12 inches of snow from western Maryland to northwestern Maine; however, sleet and freezing rain may cut down on accumulations,” said AccuWeather meteorologist Alex Sosnowski.”In some areas, it is possible that 1-2 inches of sleet falls on top of the snow.”

Below is a list of school delays and closures:

Schools in Fredericksburg City opened on a two-hour delay.

Photos and video of the early winter snowfall are making the rounds on social media:

Great working meeting in Washington – two days discussing the challenges and exciting new approaches we are undertaking as part of our #PTSD biomarker development alliance #RAPIDDx #objectivemeasures #biotyping #datascience – meeting ended with the first snow of the year 🙂 pic.twitter.com/nQAMzytKO7

Beautiful scene of snow on the ground near Washington, D.C. this morning sent in by my main man @therealWILRIGGS. pic.twitter.com/lUigoefXFQ

The snow is accumulating and we are open! ❄️ According to @capitalweather, this is Washington, D.C.’s first November snow since 1996. pic.twitter.com/eFyywEyO0Y

Cozy up under the snow in our heated ice domes. A hot buttered rum is on the way! pic.twitter.com/hVOQSUkznr

Excited for another amazing day of learning at #naeycAC ❄️ Woke up to a beautiful snowy day! 🌧Such a fun walk,with snow falling, to the Washington Convention Center! ☃️ pic.twitter.com/Vvw3b9qWFq

The Old Korean Legation covered in its first snow since opening! pic.twitter.com/W0vXJv7Q1s

Snow has arrived! The weather outside is frightful but inside WFP it’s delightful and we are open for business! ❄️ pic.twitter.com/QA8G17G3ru

I’m pretty sure this will be the first time I’ve shoveled snow in Washington, DC in the middle of November. pic.twitter.com/s6oUnD7wOu

As I stir a cup of tea at 8 a.m., am thinking the only good thing about snow accumulating in Washington, D.C., this morning is not seeing all the leaves I have yet to rake. #FirstSnow pic.twitter.com/LL2pvIySlQ

November 15. Snow in Washington. Hell is freezing over early this year. pic.twitter.com/mlKIaSidnt

Like many places from the Ohio Valley to the Northeast, the Mid-Atlantic is getting its first #snow of the season. Our cameras in the Washington, D.C. area show a wintry scene, but roads could still be slick. Latest Camera View: https://t.co/HtAF2EsXjH #dcwx pic.twitter.com/VscKLnuMXU

First #snow of the season in Washington D.C.! @wusa9 pic.twitter.com/KNRW1IyFGg

Snowing in Washington DC area. I believe it is the first snow of the year. pic.twitter.com/lcd4Oy9uEe

The Florida part of me is delighted to wake up and see the first snow of the season; every other part of me is going, anxiously, “uh it’s November 15 in Washington, climate change DEFINITELY did this.” Mainly hoping it doesn’t affect my flight tonight. 🙏 pic.twitter.com/dwWBBWMaLH

⁦@TuckerFox5⁩ we are getting snow in Fort Washington, MD and I’m loving it. pic.twitter.com/kZEKZQntGa

Happiness of an American kid when seeing the first snow of the year in Washington DC area ❄️ ⛄️ #Washington pic.twitter.com/VzkSpLk3UL

Snow falls as a women walks across the plaza at the US Capitol in Washington DC on Thursday. A winter storm advisory has been issued for the DC with moderate to heavy snow and sleet that could accumulate 1 to 2 inches.#snowday #Snow pic.twitter.com/LuDh1mjtVf

This is the wintry scene in Washington, D.C. as the White House is blanketed in snow. https://t.co/P0Vjb4Sx6l pic.twitter.com/Ju6ZiXUhU4

Washington D.C. is getting its first snow storm of the season this morning! The dogs are mixed about it… https://t.co/heqqYUT9xX #DMVWX pic.twitter.com/lmkqTBRnCe

Winter is coming to Washington DC! It’s the first snow of the season! pic.twitter.com/2i87UQxxnT