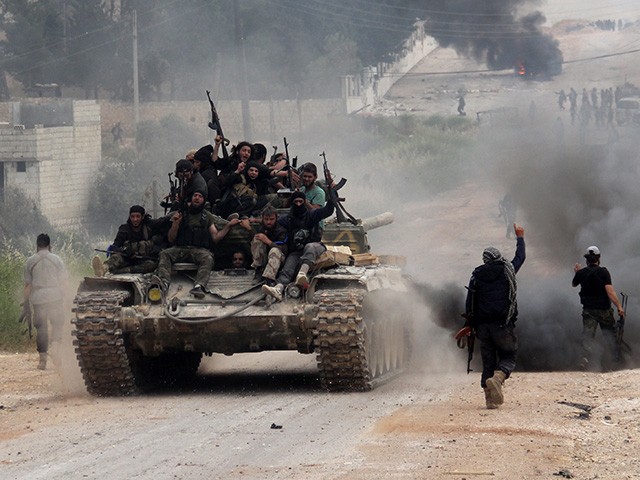 Non-governmental organizations (NGOs) “knowingly” siphoned off millions in American taxpayer-funded humanitarian assistance into the coffers of the al-Qaeda wing in Syria, the Office of the Inspector General (OIG) at the U.S. Department of Defense (DOD) reported this week.

In post-Islamic State (ISIS) caliphate Syria, the al-Qaeda-linked Ha’yat Tahrir Al-Sham (HTS) group has surfaced as the strongest jihadi group in the region.

On Tuesday, the Pentagon OIG’s Lead Inspector General for Operation Inherent Resolve (OIR), the official name of the U.S. mission against ISIS, revealed:

One investigation found that an NGO’s employees knowingly diverted thousands of USAID- funded food kits worth millions of dollars to ineligible beneficiaries (including HTS fighters) and submitted falsified beneficiary lists. The investigation resulted in USAID suspending the program and the NGO terminating the employment of dozens of individuals from March to May 2018.

According to the DOD IG, its counterpart at USAID also found that the al-Qaeda-affiliated HTS group has infiltrated NGO recipients of U.S. aid, something the agency is actively investigating.

USAID OIG also investigated diversions of assistance to HTS in another NGO’s programs, which OIG suspected was perpetrated by NGO staff affiliated with the terrorist group. Although the investigation is ongoing, the implementer voluntarily suspended portions of its programs, adapted its program to the changing risk environment, and terminated some employees.

In August 2018, USAID OIG referred its findings on the risks of humanitarian assistance being diverted to armed groups in northwestern Syria to USAID and briefed senior USAID officials. These risks included systemic coercion by HTS of NGO employees to assist in diversions; imposition of taxes, duties, and fees on USAID implementers and beneficiaries; HTS control of local councils and IDP [internally displaced persons] camp management that assist USAID implementers in identifying eligible beneficiaries; and implementers failing to adequately mitigate the threat to USAID programming from these armed group.

As a result of the USAID IG’s findings, the Trump administration had refused to approve aid in HTS-controlled areas as of October 2018.

“USAID also updated its risk analysis based on OIG findings and is engaging more closely with the U.S. interagency to mitigate risks from programming in northwest Syria,” the Pentagon watchdog agency added.

HTS mainly operates in its northwestern Syrian stronghold of Idlib province, where a deal reached between pro-opposition Turkey and Russia, dictator Bashar al-Assad’s ally, has failed to push the jihadi group out.

Several analysts have determined that the al-Qaeda branch in Syria is the terrorist group’s most robust wing.