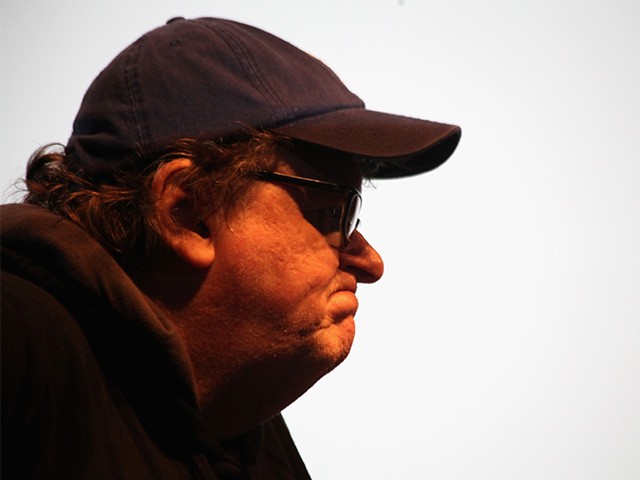 The end of Michael Moore began almost immediately after Moore’s greatest triumph, back in the summer of 2004 when Fahrenheit 9/11 grossed an incredible $222.5 million worldwide.

Moore had already won the Best Documentary Oscar for Bowling for Columbine, his 2002 anti-gun screed. Not satisfied with that, or the fact he had just quadrupled the box office record for a political documentary, Moore demanded Fahrenheit 9/11 be considered for the Best Picture Oscar. He refused to even submit Fahrenheit 9/11 for documentary consideration.

Hollywood is used to over-sized egos, but this revolutionary attack on the Academy antagonized a lot of the people who make the movies, and in the end Fahrenheit 9/11 was nominated for exactly nothing.

In the 14 years since, Moore has been removed by the Academy’s Board of Governors and exposed as a super wealthy hypocrite on too many occasions to count. He is also seen as political baggage.

During the 2004 presidential campaign, Moore enjoyed a seat of honor at Democrat John Kerry’s nominating convention. After the much-hated-in-Hollywood George W. Bush won re-election, this was seen as a big mistake on Kerry’s part and many blamed Moore and Fahrenheit 9/11 for inspiring a backlash, for animating more Bush than Kerry voters.

In other words, Moore doesn’t have a lot of friends in Hollywood. It is called “assholing” your way out of the business, and I will explain why this matters in a bit.

Worse still, while Moore was losing friends and influencing no one, his box office clout went over a cliff.

In 2007, Sicko made a very respectable $25 million, In 2009, though, Capitalism: A Love Story, which was supposed to capitalize on the 2008 economic crash, went down in flames with just $14 million.

This was not even the worst of it…

A year earlier, in 2007, Moore released Captain Mike Across America, a love letter to himself that he ended up releasing as Slacker Uprising for free. The rumor was that no one would distribute it.

Then, after disappearing for more than six years, Moore returned with Where to Invade Next in 2016, a disaster that grossed only $3.8 million.

Eight months later, in the hopes of capitalizing on the Trump phenomenon, Moore released Michael Moore In Trumpland — and it grossed only $149,000.

So what’s a fading 64-year-old Marxist to do?

Reaching back to the peak of his glory, that $222 million blockbuster, this year Michael Moore released Fahrenheit 11/9, his Trump-trashing comeback to the bigtime… Glowing reviews, tons of free publicity from a complicit media, a huge rollout into 1,719 theaters and… kersplat.

Fahrenheit 11/9 will limp out of theaters lucky to gross $6.5 million.

That is a catastrophe for Moore, a humiliating announcement that his influence is over, his time has passed, no one cares what he has to say anymore.

And with virtually no friends in Hollywood, who is going to give him that second chance, especially after he proved incapable of capitalizing on his biggest hit?