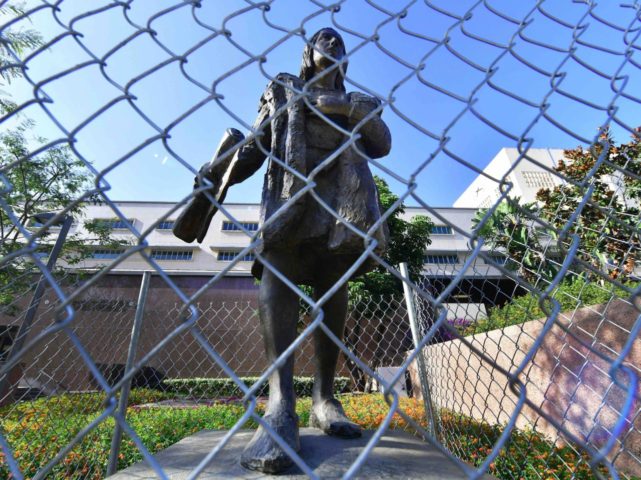 Last week, Brown University’s Office of Diversity and Multicultural Affairs sent out greeting for “Indigenous Peoples’ Day Weekend,” which has replaced Fall Weekend — Columbus Day weekend — in the uber-politically correct academic environment. Brown’s action is part of the larger effort by the academic left to cast Columbus as a villain and focus on Native Americans as sainted martyrs.

But as if this celebration weren’t politicized enough, Brown made it poisonously so by including the “Palestinians” among the “indigenous people” whose plight was being observed. But what makes this story extra insidious is the fact that the school took this anti-American movement and attempted to turn it into an anti-Israel day as well. The left is so desperate to attack Israel that they twisted their own attack on the U.S. to do so.

“Indigenous Peoples’ Day (IPD),” explained the Office of Diversity and Multicultural Affairs, “celebrates the resilience and accomplishments of Indigenous people and acknowledges the contemporary struggles indigenous communities face today. Further, IPD is an intervention against erasure, a principle barrier to the improvement of indigenous sovereignty and health status.”

The struggling indigenous people in question, according to the Diversity Office, included “567 Federally Recognized tribes, 61 State Recognized tribes,” as well as “Hawaiians and the people indigenous to its territories in the Caribbean and Pacific Oceans.” Many of these groups, the announcement went on, “experience profound disparities in health care access and health status compared to the general population, resulting in elevated rates of diabetes, liver disease, and other chronic diseases,” which are “exacerbated by a significant shortage of primary care physicians in Indigenous communities and a long-standing mistrust of the American health care system rooted in a history of genocide and forced assimilation.”

After speaking exclusively of the difficulties of indigenous people in the United States and its territories, however, the Office of Diversity and Multicultural Affairs suddenly included an oblique and gratuitous swipe at Israel: “From Standing Rock to Palestine, Indigenous communities across the world continue to experience the pernicious effects of settler-colonialism on their sovereignty, their health, and their access to their traditional lands and practices.”

A courageous Jewish student at Brown, whom I cannot name because of the danger that would put him in from increasingly violent campus leftists, wrote to Zoila Quezada of the Office of Diversity and Multicultural Affairs:

While I appreciate the overall message of your email, I am disappointed by your gratuitous political remark implying that the Palestinians are the oppressed indigenous people of Israel. Spreading misinformation appears, to me, antithetical to the mission of the Office of Diversity and Multicultural Affairs.

To include “Palestine” as an example of an indigenous community that is being damaged by the effects of settler-colonialism on their sovereignty is ludicrous. Israel is the ancestral homeland of the Jewish people and has been continuously for over 3,000 years as evidenced not only in hundreds of references throughout the Bible but in countless archeological relics and existing structures throughout the region, including Judea and Samaria (an area that the PLO first began calling the “West Bank” in 1950). “Palestinians,” who are Arabs who moved to what is now Israel mostly in the 20th century, only started calling themselves Palestinians in 1964.

You mention that Indigenous Peoples’ Day is an “intervention against erasure.” It seems the only effort at “erasure” is the stated effort by Palestinian leadership to erase Israel (see the Hamas charter: a notable highlight is “On the Destruction of Israel: “Israel will exist and will continue to exist until Islam will obliterate it, just as it obliterated others before it.”)

Jews are the indigenous people of Israel. By casually perpetuating the pernicious myths about “settler-colonialism” in the Middle East and Palestinian victimhood, the ODMA only helps delay a resolution to the many health, education, welfare and sovereignty issues of everyone in the region.

I sympathize with the suffering of the Palestinian people. However, most of their troubles are created by corrupt leadership who choose to reject peace and promote terrorism against Jewish civilians over building a functioning, productive society. Supporting Palestinians to elect responsible leaders who reject the culture of victimhood would be a much better focus of the ODMA than joining in its celebration.

I ask that you send a follow-up email to retract your reference to Palestine because it serves no purpose other than to inflame and make Jews feel unwelcome in this community. Please let me know if you would like to meet to discuss this further.

It was not my intention to start a conversation on Israel and Palestine. I appreciate your input, and please know that the use of “Palestine” in my email should not make you feel unwelcomed at AMS or in any of the ODMA spaces/events. We are here to work with you all. My most sincere apologies for all those affected with my message.

I retract my use of Palestine in an email intended to detail a little bit about the disparities in Indigenous Peoples communities in the United States(!). I shall continue to focus my energy on IPD and all the work that is yet to be done with our neighboring Native communities.

Note that while Quezada said that she didn’t mean to hurt anyone’s feelings, she did not apologize; nor did she change her assertion concerning the fictitious narrative of the indigenous people of “Palestine” being oppressed.

It should not be this lone student’s responsibility to point out to Brown officials that they are making unnecessary inflammatory remarks aimed at skewering a particular group of people, as this should be covered in general professionalism guidelines. Is it reasonable for anyone to think that a casual reference to the “Palestinian” myth of Israeli aggression doesn’t belong in the context of a school-wide email on an unrelated subject? The sole non-American example Zoila Quezada used of a supposedly oppressed indigenous people was “Palestine.” This was revoltingly inappropriate, and whether intentional or unintentional it was not a “mistake” that should have happened.

But it is likely that had this courageous student not said something, no one would have. This is the sorry state of academia in the United States today, not just at Brown University but nationwide.

Pamela Geller is the President of the American Freedom Defense Initiative (AFDI), publisher of The Geller Report and author of the bestselling book, FATWA: Hunted in America, as well as The Post-American Presidency: The Obama Administration’s War on America and Stop the Islamization of America: A Practical Guide to the Resistance. Follow her on Twitter or Facebook.