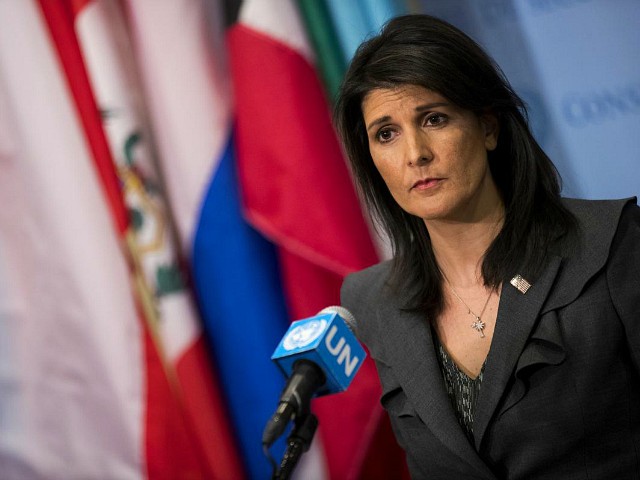 A New York Times headline attacks UN Ambassador Nikki Haley’s extravagant curtains,  even though the Obama administration ordered them in 2016.

In the first paragraph, the far-left Times goes on to attack Haley and President Trump’s State Department because they “spent $52,701 last year buying customized and mechanized curtains for the picture windows in Nikki R. Haley’s official residence as ambassador to the United Nations, just as the department was undergoing deep budget cuts and had frozen hiring.”

The Obama administration ordered those $52,701 curtains.

What’s more the Obama administration chose the $58,000 per month penthouse.

Slid quietly into the Times piece is this: “the State Department decided in 2016 to find a new home for its top New York diplomat because of security concerns.”

That of course is TimesSpeak for, “The Obama administration chose these $58,000 a month living quarters for a UN Ambassador they were sure would be working for Hillary Clinton.”

You see, when Obama spends the money it is about “security concerns.”

Nevertheless, the anti-Trump Times twice more dishonestly describes the curtains as “Ms. Haley’s curtains” and goes on to compare them unfavorably to other reports of government excess while lamenting the cutting of State Department staffers — even though the cutting of personnel is the most efficient way to save taxpayer money and is usually where most of the bloat can be found.

Some will argue this is not fake news because the Times does finally report the truth in the sixth paragraph. This defense cannot hold water in a business where everyone knows the headline is the story.

If the Times did not want to make it sound as though Haley is the extravagant one, if the Times wanted to do a story on State Department “extravagance,” it could have done so with an honest headline, as opposed to one deliberately intended to mislead readers.

This is why Americans mistrust the establishment media.

Even though the facts lay every penny of this extravagance on the Obama administration, it is the Trump White House that gets the punished. This is classic bias, classic fake news, and the norm when it comes to Republicans, as opposed to the exception.

UPDATE: The Times was forced to backtrack on its indefensible story and added this editor’s note, but only after the fake news had been up for hours:

An earlier version of this article and headline created an unfair impression about who was responsible for the purchase in question. While Nikki R. Haley is the current ambassador to the United Nations, the decision on leasing the ambassador’s residence and purchasing the curtains was made during the Obama administration, according to current and former officials. The article should not have focused on Ms. Haley, nor should a picture of her have been used. The article and headline have now been edited to reflect those concerns, and the picture has been removed.