“I think the Republican Party … we definitely need to be in the higher real wages business,” said Mike Murphy, the California-based political consultant who worked for Gov. Jeb Bush in 2016 and many other establishment GOP candidates, including Sen. John McCain.

“Real wages have been stagnant for so long, [voters] think the American Dream is now gone,” Murphy said. “Perception is reality.”

The concession came as more media outlets recognize that wages are rising in President Donald Trump’s lower immigration, higher wage economy in the run-up to the 2020 election. 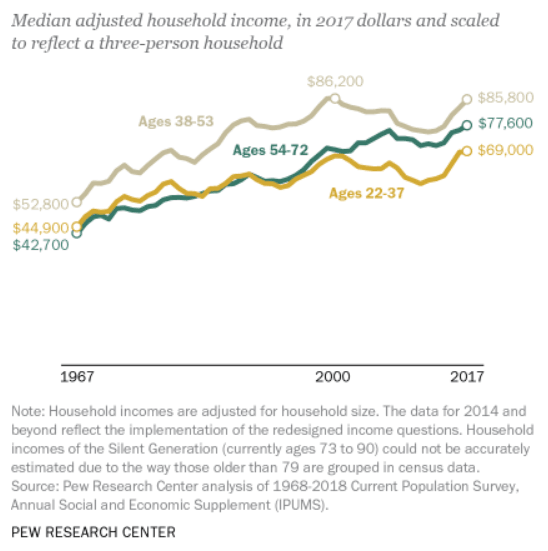 However, Murphy tried to downplay the importance of cheap labor migration, and instead suggested the GOP push for a dramatic expansion of the minimum wage.

Murphy’s comments came towards the end of a D.C. meeting of Never Trump advocates. Throughout the day, numerous advocates blasted Trump — but very few suggested that establishment leaders should compromise on their own priorities to win over the vote of Trump’s supporters.

But Murphy offered his call for higher wages when Breitbart News asked the panelists what pocketbook incentives they would offer ordinary Americans in exchange for supporting an establishment candidate.

“I’m coming around to some of this … stuff about what happened in Seattle when they voted for the minimum wage there,” Murphy responded. “All my free enterprise friends didn’t like it. It has kinda worked. It is kind of a [Ford] Model T argument – pay people enough to buy the products they make.”

Murphy later admitted that a higher minimum wage would be a tough policy for the GOP to adopt. “You don’t want a controlled economy, so it is hard to do.” But the experience of Seattle is “pretty good,” he said.

Murphy, however, also rejected the free market option of letting investors and American workers set the preferred balance of wages, benefits, labor-saving machinery and outsourcing within the United States.

Currently, the free market for labor is deeply distorted by the federal government, which inflates the new labor supply by adding one new legal immigrant worker — plus roughly one new visa-worker — for every four Americans who turn 18 each year. In sharp contrast, the federal government favors the investor class by setting Wall Street taxes lower than income taxes.

The labor market is stratified by skill, and a flood of unskilled [foreign workers] is not the biggest wage problem. The biggest wage problem we have for semi-skilled workers is [caused by] productivity increases  – robots, computers — …  [and] we have not figured out how to retrain people to keep having economic value.

Murphy’s do-not-look-at-immigration argument was backed up by Whit Ayres, who served as Florida Sen. Marco Rubio’s pollster during the “Gang of Eight” disaster and Rubio’s subsequent failed election campaign. Rubio’s very unpopular bill would have allowed companies to import an unlimited number of foreign college graduates and would have shifted income from wage earners to stock owners, according to the Congressional Budget Office. Ayres said:

I agree with Mike. The major threat to people who do not have college degrees is automation and robots and a global economy rather than lower-wage workers working in the fields and working in the chicken farms. I just don’t believe that [immigration plays a role] … [But] you’ve got to solve this middle class wage problem and that is a very, very challenging problem in a global economy.

Breitbart News has extensively reported investors’ arguments for cheap imported labor and has also extensively described the nationwide economic and civic impacts of cheap labor legal and illegal migration. Those impacts include suppressed U.S. wages, shrivelled investment in heartland states, and the election of Donald Trump in 2016.

Murphy’s argument for a raised minimum wage, moreover, is complicated by a study of Seattle’s experience with the minimum wage. According to a New York Times report about the study:

The workers who worked less in the months before the minimum-wage increase saw almost no improvement in overall pay — $4 a month on average over the same period, although the result was not statistically significant. While their hourly wage increased, their hours fell substantially. (That doesn’t mean they were no better off, however. Earning roughly the same wage while working fewer hours is a trade most workers would accept.)

It’s the final group of workers — the potential new entrants who were not employed at the time of the first minimum-wage increase — that Mr. Vigdor and his colleagues believe fared the worst. They note that, at the time of the first increase, the growth rate in new workers in Seattle making less than $15 an hour flattened out and was lagging behind the growth rate in new workers making less than $15 outside Seattle’s county. This suggests that the minimum wage had priced some workers out of the labor market, according to the authors.

But Breitbart News has described Bush’s 2016 promise to grow the economy by importing millions of extra foreign workers:

Bush said, “It seems to me we ought to be strategic about this about how do we create high, sustained economic growth And that is to shift away from family reunification being almost the sole driver of illegal immigration to narrowing that do what every other country has, spouse and minor children. And dramatically expanding immigrants that are coming to work. A  guest worker program to deal in the areas where there are shortages.”

Bush also wanted to import many foreign graduates for salaried jobs sought by American graduates. In a 2015 speech in Michigan, according to MLive.com:

“The high-skills agenda that is desperately important for us,” Bush said, “where H-1B visa holders languish and don’t get their status improved, investors, Dreamers, people that come to our great universities, all these people should be welcomed in our country, and the unwritten contract ought to be ‘Embrace our values, and you can pursue your dreams in this great country, and by doing so, you’re creating opportunity for more people.’”

Nationwide, the establishment’s economic policy of using legal migration to boost economic growth shifts wealth from young people towards older people by flooding the market with cheap white collar and blue collar foreign labor. That flood of outside labor spikes profits and Wall Street values by cutting salaries for manual and skilled labor that blue collar and white collar employees.

Immigration also steers investment and wealth away from towns in heartland states because coastal investors can more easily hire and supervise the large immigrant populations who prefer to live in coastal cities. In turn, that investment flow drives up coastal real-estate prices, pricing poor U.S. Latinos and blacks out of prosperous cities, such as Berkeley and Oakland.