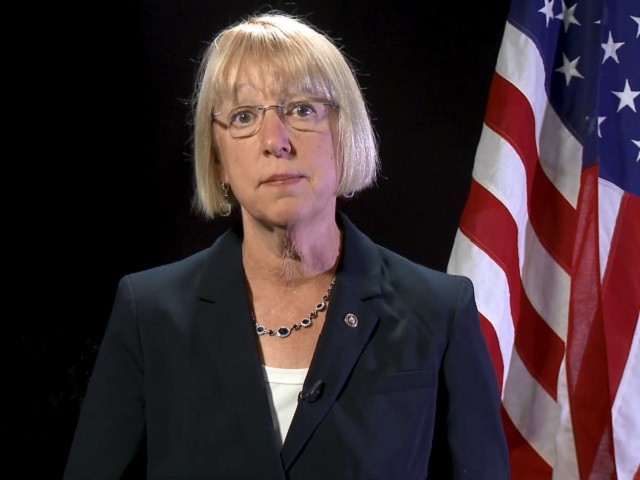 During Friday’s Democratic Weekly Address, Senator Patty Murray (D-WA) stated that Senate Republicans face a few questions, including, “Is the United States Senate a place where women are listened to, heard, and respected, or is it still just one more place where women’s voices will be swept under the rug, where our voices are ignored, attacked, and undermined?”

Like so many women and men across the country, I watched Dr. Ford testify on Thursday with tears in my eyes. Her courage is truly incredible, and she is an inspiration to women and girls and sexual assault survivors across the country. Now that we have seen Dr. Ford share her experience so bravely and vividly, and we have heard what Judge Kavanaugh has to say regarding just one of the allegations he faces, the eyes of the nation are on this Supreme Court nomination, and the Republicans who control the Senate face a few very simple but absolutely critical questions. Is the United States Senate a place where women are listened to, heard, and respected, or is it still just one more place where women’s voices will be swept under the rug, where our voices are ignored, attacked, and undermined? Will the United States Senate do its job when it comes to our constitutional advice and consent role and truly look into this nominee and make sure he is fit to sit on our nation’s Supreme Court, or will we rush through this process, not allow all the voices to be heard or information to be brought forward, and try to jam this nominee through, no matter what?

People across the country are watching closely, and I am hoping that Senate Republicans allow us to get these questions right. Because, let’s take a step back here,
multiple women have bravely come forward to share their experiences regarding Judge Kavanaugh and sexual assault. These women were immediately attacked. President Trump and some Senate Republicans said they were making it up, that if their claims were true they would have reported it when it happened, that they were ‘mixed up.’ Part of a smear campaign, engaged in a ‘drive-by shooting‘ of Judge Kavanaugh, and much — and worse. It has been truly horrific. And now, instead of listening to these women, digging into these serious allegations, and doing their jobs, Senate Republicans seem intent on rushing this nomination through to confirm Judge Kavanaugh, no matter what he may have done.

But here’s the bottom line, and it’s something that should not be partisan or controversial, the United States Senate should do its job. Senate Republicans should allow us to do our jobs. They should allow a full FBI investigation of these allegations, which all of the women have welcomed and called for, but that Judge Kavanaugh and the people trying to protect him are trying to prevent from happening. If he has truly nothing to hide, and he truly wants the facts to come out, he should welcome this. They should hold more hearings with the women who have come forward, along with all the relevant witnesses to testify under oath. And they should slow this down and end this mad dash to a confirmation. The only reason to rush would be to protect Judge Kavanaugh and prevent the truth from coming out, no matter what he has done. That would be absolutely wrong and it would be unacceptable.

I first decided to run for the Senate when I saw an all-male Judiciary Committee mistreat Anita Hill in 1991 during the Clarence Thomas confirmation hearings. I ran to be a voice for the women and men across the country who thought it was absolutely wrong for her to be ignored and attacked and swept aside and disbelieved. And now, 27 years later, women and men are watching. Our daughters, sons, and grandkids are watching. They’re paying attention. They are asking those questions I asked before, will women be listened to? Will women be heard? And this time, I hope the United States Senate gets it right.