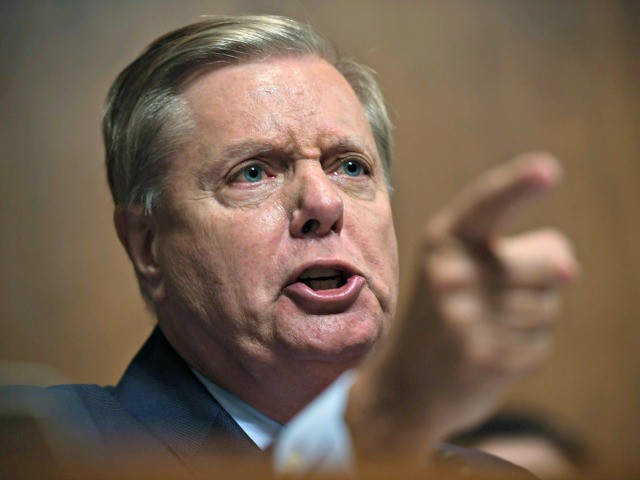 Following Lindsey Graham’s passionate defense of Judge Brett Kavanaugh this week, many on the left took to making homophobic attacks against Graham.

Lindsey Graham, who is unmarried, has occasionally been derisively accused of being gay by critics and pundits who engage in homophobia by using homosexuality as an implicit insult.

After Graham strongly defended Kavanaugh this week, the same homophobic jokes came back in style among liberal comics and establishment media figures.

“I very much believe in allowing people to be heard. But I am not going to be played, and I’m not going to have my intelligence insulted by the Michael Avenattis of the world. I will not be a participant in wholesale character assassination that defies credibility,” Graham tweeted.

Rosie O’Donnell replied, “fuck u u closeted idiot – this is the patriarchy exposed – this is reality deal with it !!#NoKavanaughConfirmation #NotMyPresident”

Comedian and far-left activist Kathy Griffin also joined in on the gay-bashing, tweeting on Thursday referring to Graham as a “she” and calling him “Miss Lindsey Graham.”

Oh lookee lookee here. Miss Lindsey Graham doesn’t have the balls to speak up today does she? #KavanaughHearings

Look at Miss Lindsey Graham trying to be all tough! What?Does Putin have a picture of Lindsay fucking a donkey? #KanavaughHearings

“Look at Miss Lindsey Graham trying to be all tough! What?Does Putin have a picture of Lindsay fucking a donkey? KanavaughHearings,” Griffin tweeted.

On Thursday night, Jimmy Kimmel accused Graham of “fabricated outrage” at the hearing, adding, “He warned Democrats that if this is the new normal, if this is the way it’s going to go, they better watch out for their own Supreme Court nominees, as if Merrick Garland isn’t out there somewhere judging a dog show right now.”

Kimmel then engaged in gay-bashing, comparing Graham to Liberace, a famous gay performer.

“And once he got some camera time–somebody must have told Lindsey Graham that Donald Trump was watching because he lit up like someone left a thumbtack on Liberace’s piano bench,” Kimmel said.

On Friday, HBO host Bill Maher went even lower, not only joking about Graham being gay, but poking at the late John McCain as well.

Maher joked that Graham needed the “stabilizing influence of his dead boyfriend.”

Finally, CNN hosts Chris Cuomo and Don Lemon yukked it up Friday, mocking Lindsey Graham for having “the vapors.”

“First he’s got the vapors!” Don Lemon said in a mock Southern accent, referring to a joke where women who were said to have the “vapors” if they were acting hysterical or irrational.