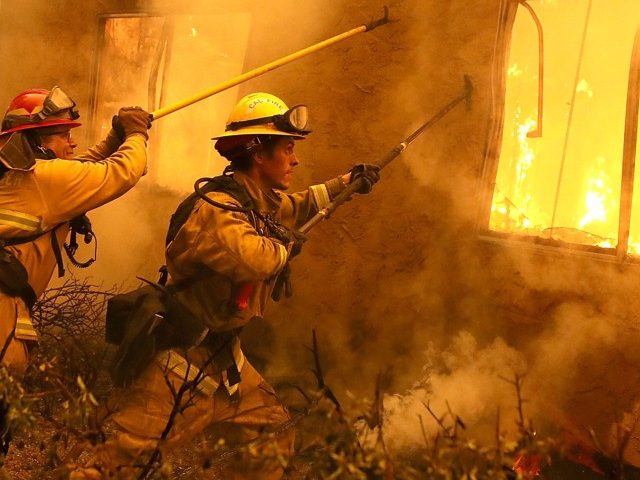 Tragedy struck home for the first responders who sprung into action to save lives impacted by a Northern California blaze as more than 90 of them lost their homes to the wildfires in the region.

The Sacramento Bee reported Monday that at least 90 firefighters and police officers stationed in Paradise and the surrounding area lost their homes in Thursday’s wildfire.

Officials say at least 33 current and former firefighters in Paradise lost their homes in the blaze, and 17 of the town’s police officers also had their homes claimed by the inferno.

Butte College Police Chief Casey Carlson said he worked the emergency command post for 48 hours straight when he discovered the fire claimed the place he called home for ten years. Carlson added that three of his staff members also lost their homes.

“When we got the evacuation order, I went up to grab a few things, and houses (on the block) were on fire when I was leaving,” Carlson said. “You kind of have to accept it. You know you are helping folks, and that is what matters.”

“I have my kids, the family and the dog. That’s what counts,” he added.

Some organizations have provided resources and assistance to the first responders who lost their homes.

The International Association of Fire Fighters (IAFF) established a help center in Chico for displaced firefighters, offering them everything from financial assistance to emotional support.
The IAFF said it is working with other firefighters’ organizations to assist those first responders and their families who lost their homes.

“Like so many people in these communities the loss is devastating to our members,” said IAFF state service representative Tim Aboudara Jr., who is also a Santa Rosa firefighter.

“It’s particularly insulting because they have spent so much time fighting fire and protecting homes and to be out on the line and doing their job and not know the status of their family and the status of their home is very difficult. But they never back down,” he added.

Even celebrities, such as celebrity chef Guy Fieri, have also pitched in to help the first responders. Fieri served meals to Butte County firefighters battling the deadly Camp Fire blaze over the weekend.

The Northern California wildfire has claimed the lives of at least 42 people, and has been the deadliest wildfire on record in the state.